Zero Tolerance for Political Persecution in UkraineQuestions for the President on the first anniversary of Yury Lutsenko’s arrestLutsenko trial: Witness sees nothing wrong in celebrating Police DayAnother prosecution witness testifies in Yury Lutsenko’s favourLutsenko: Visits not allowed, so birthday greetings on bannersLutsenko trial: Court allows witness testimony to be read in his absenceYet more witnesses testify in Yury Lutsenko’s favourFormer German Ambassador: Ukrainians must not be held hostage by one leaderDanish Helsinki Committee issues damning legal assessment of the Tymoshenko caseUkraine parliament rejects Tymoshenko releaseChanges in judge corps in the court where Tymoshenko appeal to be heardJose Manuel Pintu Teisheira: Yanukovych understands what needs to be doneGerman Minister: Release of political prisoners in Ukraine would be a signal to the EUTymoshenko presented with new charges in SIZO cellThe number of criminal investigations against Tymoshenko is growingPACE Co-Rapporteurs: Serious measures cannot be excludedPACE Co-Rapporteurs not allowed to visit Yulia TymoshenkoBritish Foreign Minister: The fate of the EU-Ukraine Association Agreement is up to KyivLutsenko Trial: Witnesses questioned after the InvestigationYet another witness confirms Lutsenko’s predecessors could also be prosecuted
• Topics / Politics and human rights

Nico Lange on lack of reforms, trust and on a baffling readiness to risk relations with the EU 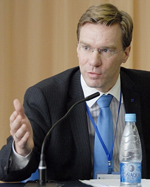 The Director of the Kyiv Office of the Konrad Adenauer Foundation, Nico Lange, speaking at an event organized by the Horshenin Institute, says that he does not understand why Ukraine’s leaders are risking relations with the EU over the prosecution of former Prime Minister Yulia Tymoshenko.

“From a rational point of view it is hard to understand that over the situation with Yulia Tymoshenko those in power are ready to risk both relations with the EU and with the USA and other countries”.

He added that maybe Ukraine’s ambitions regarding relations with the EU were great, but that it would have been possible to achieve much more than with the Russian Federation. And what eventuated is what eventuated. He stressed that the EU position was absolutely clear. In order to achieve an association agreement certain conditions needed to be created. This first and foremost concerned the justice system in Ukraine.

He feels that the lack of trust between Yanukovych and many EU leaders also had an adverse effect on the negotiations.

“Statements are very good, and you need to begin with statements. However at some point you have to carry them through, especially if they’re individual statements in conversations between the heads of states and governments. I don’t think Ukraine should play games of rhetoric.”

He warned of the great danger in the fact that reforms have been announced yet are not effectively being carried out.  He stressed that during an election year, it would be difficult to carry out reforms, especially in the social sphere.   Yanukovych had received a real chance through his creation of a majority in parliament, yet in the year just ended there was no sign of this chance being taken.

From the report at UNIAN