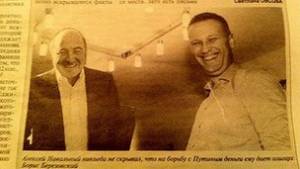 The Russian blogger leading Russia’s vote-rigging protests has accused supporters of Vladimir Putin of seeking to smear him with a fake photo.

Alexei Navalny proved that a picture in a newspaper distributed by Putin supporters was a forgery when he published the original on his blog.

Protesters fear the March presidential vote may be rigged to favour Mr Putin.

Currently prime minister, he is standing for re-election after serving two previous terms as president.

Mr Navalny, a lawyer who campaigns against corruption, was a key speaker at the last rally, on 24 December, which drew an estimated 100, 000 people.

The photo shows Mr Navalny and Mr Berezovsky standing beside each other, smiling for the camera, with the caption: "Alexei Navalny has never made any secret of the fact that the oligarch Boris Berezovsky gives him money to fight Putin."

Russia has been trying for years to extradite Mr Berezovsky, who was granted political asylum in the UK in 2003. He is wanted on fraud charges, which he denies.

In a blog posting which led with the words "News from [Vladimir] Putin’s electoral campaign", Mr Navalny published the original photo, sent to him months earlier by photographer Alexei Yushenkov as a souvenir.

Taken on 25 May in the offices of Russian radio station Moscow Echo, the snap shows the blogger alongside Mikhail Prokhorov, a Russian billionaire who has since declared himself a candidate in the March election.

On his own blog, Mr Yushenkov confirmed that the photo had never been published because of its poor quality and he surmised that it had been stolen when Mr Navalny’s email account was hacked last year.

Russian bloggers have been posting their own parodies of the fake photo, some of which were published on Mr Navalny’s blog.

The photozhabas,  as digitally altered images are known in Russian internet slang, show the blogger posing with everyone from Soviet dictator Josef Stalin to Bender, the robot in the cartoon Futurama.

In another development, the Urals editor of popular Russian newspaper Argumenty i Fakty has denied any link to the doctored photograph.

Dmitry Bondarev told the BBC’s Russian Service that his publication had no connection to the other paper, which bears the name "Argumenty i Fakty - Urals Digest" and looks similar.

A note on the paper with the fake photo, which is reportedly a special edition praising Mr Putin and trashing the opposition, says that it was compiled by the All-Russia Popular Front - a political coalition launched by Mr Putin in May.