Lutsenko trial: 14 hour court hearing with four "ambulance breaks"France’s Human Rights Ambassador condemns violation of Lutsenko’s rightsFreedom House: Ukraine dips badly in democratic rating for a second yearFrench human rights ambassador prevented from seeing TymoshenkoPolitical persecution is no election tacticSBU investigators control visits to Tymoshenko in penal colonyYulia Tymoshenko under 24-hour surveillanceNico Lange on lack of reforms, trust and on a baffling readiness to risk relations with the EUZero Tolerance for Political Persecution in UkraineQuestions for the President on the first anniversary of Yury Lutsenko’s arrestLutsenko trial: Witness sees nothing wrong in celebrating Police DayAnother prosecution witness testifies in Yury Lutsenko’s favourLutsenko: Visits not allowed, so birthday greetings on bannersLutsenko trial: Court allows witness testimony to be read in his absenceYet more witnesses testify in Yury Lutsenko’s favourFormer German Ambassador: Ukrainians must not be held hostage by one leaderDanish Helsinki Committee issues damning legal assessment of the Tymoshenko caseUkraine parliament rejects Tymoshenko releaseChanges in judge corps in the court where Tymoshenko appeal to be heardJose Manuel Pintu Teisheira: Yanukovych understands what needs to be done
• Activity / Political persecution in modern Ukraine
• Topics / Politics and human rights
• Topics / The right to a fair trial
• Topics / The right to health care 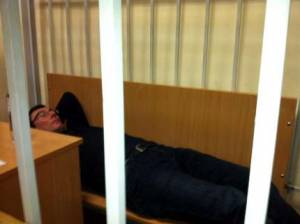 Former Internal Affairs Minister Yury Lutsenko was due but did not arrive in court at 8.05 on Friday morning after a court hearing that went on until 23.30 the previous evening (15 hours), with 4 enforced breaks while ambulances were called to provide medical assistance to the defendant.

At 8.20 Judge Vovk announced the beginning of the court hearing, but was then forced to adjourn it.  The trial has been marred by grave procedural violations from the outset, but presumably the defendant’s presence was required.

The notes that no witnesses were waiting in the corridor, so it is likely everybody in fact knew that the hearing was unlikely to proceed.

During the day the Prosecutor General’s Office , the State Prosecutor in the case. He asserted that Yury Lutsenko had refused to go to the court, while according to the medical staff of the Penitentiary Service there was nothing to stop him taking part in the court hearing. He claimed that the defence was in this way dragging out the trial.

He also alleged that the length of the previous day’s hearing had been the fault of the defence and of MPs present in the courtroom.

Loban also asserted that “as of the present day 83 witnesses have been questioned. They have all confirmed their testimony given during the pre-trial examination regarding the circumstances of the crimes which the defendant is accused of. ….”

He alleged that the defence “is trying to unlawfully take the function of the court upon themselves and deliberately provoking witnesses to provide their personal thoughts about the guilt of the defendants. This is in turn leading to the spreading of distorted information about the course of the court examination”.

Loban also saw fit to say that Yury Lutsenko had lay on his bunk to be photographed.

Please see the very large number of reports below which indicate that witnesses do not consider that their testimony was recorded correctly and / or do not confirm it during the court hearings.

There have also been a number of reports, some citing medical experts who examined him, which suggest Mr Lutsenko has a serious medical condition.