Residences of Azarov, Lytvyn and Yushchenko to cost the taxpayer 50 million UAH 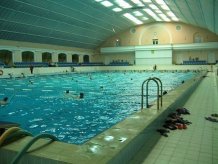 The pool at Koncha-Zaspa which the President’s Administration spent 5 million UAH renovating mid 2011 (photo from ! + !)

Maintenance of the residential areas “Koncha-Zaspa” and “Pushcha-Volchytsa” which contains the residences of Ukrainian public officials will eat up 50 million UAH from the 2012.  This is according to the response received by Ukrainska Pravda to its information request from the President’s Administration.

The estimate for “Koncha-Zaspa” and “Pushcha-Volchytsa” is drawn up within the framework of the public funding programmes of the State Department of Affairs [DUS] “Financial support for sanatorium-resort institutions”.

The Head of DUS, Andriy Kravets also lives in “Pushcha-Volchytsa”, as does the First Deputy Prosecutor General Renat Kuzmin and others.

At the same time President Yanukovych and Prime Minister Azarov have on many occasions called on their fellow citizens to be understanding about reductions in social payments due to lack of public funding.