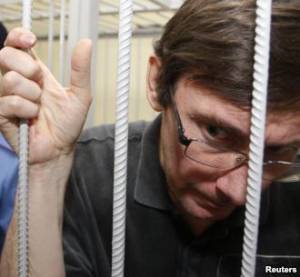 The Pechersky District Court in Kyiv under presiding judge Serhiy Vovk on Monday refused to release former Internal Affairs Minister Yury Lutsenko from custody despite the 26 January Parliamentary Assembly of the Council of Europe Resolution.

Lutsenko’s defence lodged the application on Monday citing both the former Minister’s deteriorating health and the resolution which is unequivocal regarding prosecution of former government officials.

The only acknowledgement of the seriousness of the PACE Resolution came in the fact that Vovk and the other two judges retired for a time to the consulting chamber. Serhiy Vovk has over the last year and a month since Lutsenko was taken into custody repeatedly rejected applications for Lutsenko’s release, and not always after such consultation.

Judge Vovk, after returning, asserted that Lutsenko’s detention was in accordance with current legislation, that he had no report of a deterioration in Lutsenko’s health and he saw no grounds for changing it.

With regard to the PACE Resolution he said that “Ukraine’s Constitution guarantees inviolability of the court, and prohibits pressure on it in any form. It makes no different which body this is from or how this pressure is brought to bear”.

The Resolution states for example:

2.       The Assembly expresses its concern with regard to the criminal proceedings initiated under Articles 364 (abuse of office) and 365 (exceeding official powers) of the Criminal Code of Ukraine against a number of former government members, including the former Minister of the Interior, Mr Juriy Lutsenko, the former Acting Minister of Defence, Mr Valeriy Ivashchenko, and the former first Deputy Minister of Justice, Mr Yevhen Korniychuk, as well as the former Prime Minister, Ms Yulia Tymoshenko.

In this respect, the Assembly asks the President of Ukraine to consider all legal means available to him to release these former government members and to allow them to compete in the upcoming parliamentary elections. It considers that strict international standards delimitating political and criminal responsibility need to be developed.

4.         The Assembly regrets the numerous shortcomings noted in the trials against former government members and considers that they may have undermined the possibility for the defendants to obtain a fair trial within the meaning of Article 6 of the European Convention of Human Rights (ETS No. 5)

10.       The Assembly notes with concern reports that the health of the former Minister of the Interior, Mr Jurij Lutsenko, and of the former acting Minister of Defence, Mr Valeriy Ivashchenko, who are in detention on remand, is rapidly deteriorating and that both of them need medical treatment outside the prison system. The Assembly asks that both men be released at once for humanitarian reasons pending the outcome of their trial, also in view of its concerns regarding recourse to detention on remand in Ukraine.