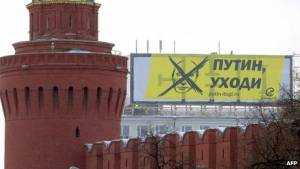 Russian opposition activists have erected a giant banner opposite the Kremlin saying "Putin go away".

The banner could be seen for some hours on the roof of a building on the opposite bank of the Moscow River, before it was taken down.

Prime Minister Vladimir Putin is tipped to win the presidential election on 4 March. He had two terms as president, in 2000-2008.

An activist group called Solidarity says it put up the banner.

The yellow banner showed a big black cross over a sketch of Mr Putin’s face.

International observers, as well as Russian opposition activists, voiced concern about reports of ballot-stuffing and other irregularities in the December vote.

Mr Putin insisted the parliamentary results were valid and scoffed at some of his opponents.

But he has asked Russia’s central electoral commission to install web cameras at all polling stations for the March vote.

Tens of thousands of activists have attended opposition rallies in recent weeks and another such event is planned for Saturday. Many of them are urban professionals connected through online social networks.