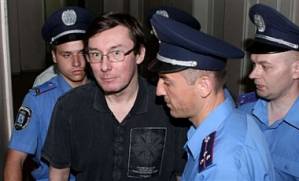 On Thursday during the ongoing, though noticeably accelerated trial of the former Internal Affairs Minister, Yury Lutsenko, the court was again asked for the opportunity to read the alleged 50 statements from witnesses whose testimony was simply read out in court. This testimony was read out supposedly because the said witnesses had sent statements saying that they were unable to attend, however these statements have not been added to the file, although the 7 days which the judge said was needed for them to be prepared have elapsed.

As reported, presiding judge Serhiy Vovk ignored objections from the defence and read the testimony out.  Not only had Yury Lutsenko asserted that this violated his right to question the witnesses, but also arouses concern for other reasons.  A number of witnesses have alleged that their testimony given at pre-trial investigation stage was distorted, or have stated clearly in court that the behaviour which Lutsenko is charged with was normal procedure and lawful.

During the hearing, a CD recording was played of the interrogation of one witness, Valery Melnyk, whose testimony in court differed radically from that apparently given at pre-trial investigation stage. Mr Melnyk said in court that he had been summoned late in the evening and not given time to take his medication, however there are no details about this on the video.

On the other hand, the defence demanded to see the video cassette, not a CD copy. They also wanted to know who was turning the video on and off since while this was happening the investigator was sitting at the computer.

In the afternoon the court watched the broadcast of the political talk show Shuster Live from 12 November 2010 in which Yury Lutsenko took part, together with the former Head of the Prosecutor General’s Office Investigation Department on Particularly Important Cases, Oleksandr Kalifitsky.

Yury Lutsenko had stated: “I want to see again the excerpt from the programme after my first appearance where Kalifitsky, clearly on the instruction of Renat Kuzmin [Deputy Prosecutor General – translator] threatens live that if one prosecution is not enough for me, that new ones will be initiated”.

The excerpt in question clearly states that “these are just a small part of the charges against Lutsenko, there’ll be others”.

Yury Lutsenko then made a formal statement alleging an offence under Article 387 of the Criminal Code on divulging details of criminal investigations, as well as defamation and a number of false assertions by Kalifitsky.

Judge Vovk accepted the statement, adding the recording as evidence. The statement will be sent to the Prosecutor General’s Office.

At the end of the hearing Vovk announced that all material evidence had been examined and that therefore evidence from the secret Volume 18 would be examined in closed session.

From the report of the day’s proceedings at the