Tens of thousands gather in Moscow for “Fair Elections” protest 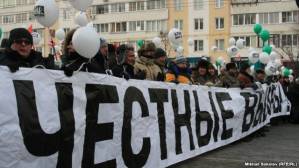 Demonstrators braved freezing temperatures to turn out in Moscow

MOSCOW -- Tens of thousands of Russians braved freezing temperatures to gather downtown in Moscow and demand an end to Prime Minister Vladimir Putin’s rule ahead of a presidential election next month.

Organizers say over 100, 000 protesters came together for the "For Fair Elections" protest, the third such mass protest since the disputed December 4 parliamentary elections, which kicked off with a march through the center of the capital. Police, which have historically underestimated attendance at opposition rallies, gave a considerably more modest estimate of 23, 000.

The march -- in which protesters carried signs with slogans like "Putin in the number one crook and thief" and "Go Away Putin, We Are the Real Power Here" -- climaxed with a rally on the city’s Bolotnaya Square, where opposition leaders and prominent cultural figures addressed the protesters.

Speaking to RFE/RL’s Russian Service, leading opposition figure Vladimir Ryzhkov estimated the crowd size at 120, 000, which would make it the largest of the three protests since the disputed elections.

The rally -- which took place on the 22nd anniversary of a massive demonstration against Soviet rule in 1990 that drew hundred of thousands -- included liberals, nationalists, communists, and ordinary citizens, united in their opposition to Putin’s rule.

Addressing the protesters, Grigory Yavlinsky, leader of the pro-Western Yabloko party, noted the crowd’s political diversity: "Yes, we are all different, but we are of the same color, the color of the Russian flag. Together we are defending the future of our country."

Cultural figures like rock icon Yury Shevchuk and popular crime author Boris Akunin, who have figured prominently in the protest movement, also addressed the crowd. Shevchuk performed his song "Rodina" ("Motherland"), which was popular in the early 1990s.

A smaller rival pro-Putin demonstration also took place at Poklonnaya Gora in western Moscow. Its organizers have billed the rally as an "anti-Orange" protest against an opposition they claim is trying to mimic Ukraine’s 2004 revolution.

"The only candidate who has supported our anti-Orange rally is Vladimir Putin and we say to him: ’Putin, you can prevent an Orange revolution [in Russia], ’" said Aleksandr Prokhanov, editor in chief of the nationalist weekly "Zavtra, " addressing the rally.

Police said the pro-Putin rally drew 138, 000, but attendance at pro-regime demonstrations has been inflated by the authorities in the past. In previous rallies, there have also been widespread reports of the authorities ferrying in sympathizers by bus. Moreover, teachers have said they came under pressure from their trade unions to attend the pro-Putin demonstration.

RFE/RL correspondents on the scene at Poklonnaya Gora said the crowd was, in fact, no larger than 15, 000.

No arrests are expected in Moscow, where city authorities have sanctioned the demonstration.

Elsewhere in the provinces, opposition rallies are often brutally dispersed by police, although on February 4 small numbers of demonstrators in the Far East’s Vladivostok, Khabarovsk, and Yuzhno-Sakhalin have gathered without arrests.

Organizers had feared that the bitter cold snap sweeping Europe and Russia would depress turnout and derail the protest movement’s momentum. Temperatures dropped to minus 20 degrees Celsius in Moscow on February 4.

Aleksei, a 34-year-old instructor at a theater institute, admitted the temperature was presenting a challenge -- but not enough of one to keep him off the streets.

"It is cold, I’m already freezing, but still we have to march, " he said.

Svetlana, a 22-year-old Internet marketing expert, said she had joined the march because of her fears that Russia was stagnating under Putin’s 12 years in power.

"I don’t want Putin to stay for another term. I want things to change in our country because when one person is in power for so long, the country is not moving forward and is not progressing. I want progress, I want something better, " Svetlana said.

The authorities have not fulfilled any of the protesters’ demands. They have made some small concessions such as promising to restore elections for regional governors, who are currently appointed by the president, and easing the rules for the registration of political parties and presidential candidates. Those changes, if enacted, would not go into effect until after the March 4 presidential election in which Putin is expected to secure a third term in the Kremlin.

The series of protests that began in December are seen as symbolizing the awakening of a Russian civil society that has lain dormant during Putin’s rule.

But the movement, which unites an awkward coalition of nationalists, communists, liberals, and gay-rights activists, has been criticized for not producing a concrete political vision of Russia’s future that would serve as an alternative to Putin’s.