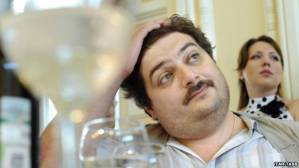 A rock star, a poet, a detective novelist, and an actress aren’t who usually come to mind as leading members of an organization called the League of Voters.

On January 29, the league helped organize a colorful automobile protest on Moscow’s Garden Ring road that drew hundreds of customized cars to drum up support for a larger demonstration planned in the capital for February 4.

"Russians take a long time to harness up, but once they have they ride quickly, " Bykov says. "They have now harnessed up. The optimum reaction to this, of course, would be dialogue [with the authorities], but we don’t hear any dialogue."

The League of Voters is just one example of the Russian cultural elite’s awakening in the aftermath of disputed parliamentary elections in December, which sparked a series of massive protests.

Making Up For Lost Time?

Russia’s vaunted intelligentsia had been largely pliant since Putin rose to power over a decade ago. But in recent months, musicians, writers, actors, and television personalities have joined a newly politicized urban professional class at the vanguard of a new protest movement.

"It was the same thing in the 1980s or the 1960s when there were big waves of pro-the democratic movement in the Soviet Union, " Kagarlitsky says. "They were led by the best-known and most-popular intellectual figures."

This was the case during Soviet leader Nikita Krushchev’s thaw, when novels by writers like Andrei Sinyansky and Yuly Daniel, which were smuggled into the West, exposed the bleak realities of Soviet life. It was also true during Mikhail Gorbachev’s perestroika, when journalists like Aleksandr Kabakov and periodicals like the weekly "Ogonyok" pushed the boundaries of the new freedoms.

Today, longtime opposition politicians like Grigory Yavlinsky and Boris Nemtsov are still visible at demonstrations. But it has been writers like Akunin and journalists like Leonid Parfyonov who have excited the crowds with rousing speeches.

Akunin has taken a particularly high-profile role, earning Putin’s ire in the process. In a recent interview the prime minister suggested that Akunin, whose real name is Grigory Chkhartishvili, had joined the opposition due to animosity toward Russia stemming from his ethnic Georgian heritage.

The popular writer has also been a formidable presence in the intramural debates among the opposition. In a memorable and widely circulated online exchange, Akunin confronted and debated anticorruption blogger Aleksei Navalny -- who is emerging as a leading opposition figure -- about his nationalistic views and whether they have a place in a liberal opposition movement.

Akunin says the prevailing popularity of the cultural elite reflects an abiding mistrust of politicians after more than a decade of Putin’s rule. He tells RFE/RL that he initially got involved because he was asked to do so by protest organizers.

"People want to see in their ranks those whom they know. What they do -- whether they write books, make films, or sing is unimportant, " Akunin says. "I think all this means is that people don’t want to see party politicians at the forefront. It’s more important that every one of us is a professional -- the vast majority of people on the square [protesting] were professionals. We are theirs. Politicians are other people."

Russia’s rock musicians are also playing a prominent role. Following the February 4 demonstration, Shevchuk and other rockers including "bard" Yuly Kim and singer-actor Aleksei Kortnev will play a concert in support of political prisoners.

As the March 4 presidential election approaches, the newly energized and politicized cultural elite is seeking ever more creative ways to express their dissent.

Masha Gessen, a prominent journalist and commentator, has been holding weekly get-togethers at Masterskaya, a bohemian-style bar and cafe located near the State Duma, to generate new protest ideas.

Meanwhile, opposition literature and subversive political debate have migrated from the smoky kitchens and salons of old to the Internet and blogosphere. A highly successful example of this is Bykov’s "Citizen Poet" project, which has become an online sensation.

Every week, Bykov’s barbed, anti-Putin satire-in-verse is performed by the renowned actor Mikhail Yefremov and published in video clips. The project has been so successful that it is now being performed in theaters across Moscow and beyond.

To be sure, today’s intelligentsia has a significant number of regime loyalists among its ranks. Putin has been particularly diligent in co-opting figures such as legendary film directors Nikita Mikhalkov and Stanislav Govorukhin, who is head of the prime minister’s campaign team.

Nevertheless, Akunin says he sees it as his responsibility -- and that of other members of the cultural elite -- to use their fame and talent to improve their society:

"Whatever our professions, we realized that we have to work together -- the house is on fire and we have to put it out together, " Akunin says. "Then we can return to what we were doing."