Ekho Moskvy board shuffled ahead of Russian election 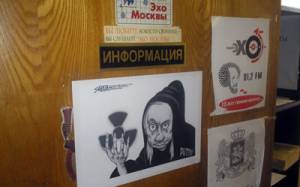 A poster depicts Vladimir Putin as the Grim Reaper on one of Ekho Moskvy’s studio doors. (CPJ/Nina Ognianova)

The Russian blogosphere erupted with comments today following an announcement that the board of directors of the iconic radio station, Ekho Moskvy, will be changed. The timing of the development--weeks before presidential elections--and the potential consequences for Ekho’s editorial policy threw listeners into a frenzy of worry and speculation.

The purported initiator of Ekho’s board shuffle, Gazprom-Media, is the media arm of the state gas monopoly Gazprom; with 66 percent of shares, it is the majority owner of Ekho Moskvy. Responding to suggestions that the move was masterminded by the Kremlin in order to hush criticism of Vladimir Putin in the run-up to the March 4 vote, Gazprom-Media said the shuffle stemmed from "internal corporate procedure" and the need to adjust the makeup of Ekho Moskvy’s board to "corporate standards." But Gazprom-Media also saidthe move was hastened by "the recently heightened attention from various sides to the radio station."

Gazprom-Media did not clarify what it meant by "various sides" or "heightened attention, " fueling conjecture of political interference.

In an open letter to listeners, the staff of Ekho Moskvy said the board shuffle was conducted inexplicably prematurely -- before the scheduled June annual board meeting, at which such procedural issues were to be discussed. The staff posed the question: Why the urgency?

"We are expressing concern, " the open letter said, "that, as a result of these events, two independent directors -- [Aleksandr] Makovsky and [Evgeny] Yasin -- who have helped develop Ekho Moskvy for 11 years, were forced to leave. We believe that their removal from the board of directors is unjust."

In an interview with the independent news website Gazeta, now-former Ekho Moskvy Director Yasin said he believes authorities "wish to attain the obedience of Ekho Moskvy and establish control of its editorial policy." Yasin said the move could only be orchestrated by the high echelons of power because Gazprom has had a hands-off attitude to the station in the past. "The government apparently wants to establish control over independent media, " Yasin told Gazeta, "and Ekho Moskvy is, in a sense, a flagman. If it changes course, all others would either be falling in line or resist."

Ekho Moskvy was created in the years of Glasnost by a group of independent-minded journalists as the first station in a new Russia to embrace news and debate as its main format. It was a different kind of radio that required a new crop of reporters -- not indoctrinated in the old ways but intellectually curious and able to think outside the proverbial box.

The founders tapped Aleksei Venediktov, then a history teacher with a deep interest in politics and sharp analytical abilities, to join the station. Venediktov eventually became Ekho’s editor-in-chief. He has proved apt at navigating the treacherous waters of Russian politics for two decades, surviving periods of intense pressure on independent media coupled with brutal attacks on journalists who cover sensitive subjects. Venediktov has been able to deflect various accusations by the Kremlin and other Russian top agencies, and protect his journalists and commentators.

Ever since its inception, Ekho Moskvy has been regarded as a phenomenon -- it has remained on the air while retaining its critical approach, a plurality of voices, and trademark irreverence to authorities. As The New Yorker’s David Remnick put it in a 2008 profile piece, "in the authoritarian ecosystem of Vladimir Putin, [Ekho Moskvy] is one of the last of an endangered species, a dodo that still roams the earth."

Does today’s announcement signal the beginning of the end of Ekho as we know it? What does the change mean? Listeners -- in Russia and abroad -- are trying to make sense of it.

In a lengthy interview with the anchors of Ekho’s popular political show "Razvorot, " Venediktov tried to quell fears that editorial changes are imminent. While calling on listeners to "stop panicking, " he confirmed that the board shuffle means that Gazprom-Media can now easily dismiss the editor-in-chief. "The balance [of the votes] has changed, " Venediktov said, "to the benefit of Gazprom-Media."

Will the Kremlin go as far as ordering Venediktov’s sacking? No doubt, a move that blatant would be unspinnable -- even for Putin’s slick press secretary, Dmitry Peskov. Venediktov was right when he said the board changes are more likely meant as a warning to other independent outlets -- a warning to not criticize Putin (who is favored to win the vote) or the ruling United Russia party; to remember that, no matter how tolerant the Kremlin may seem, it can still pull the plug.

But today’s development is also a sign that Russian authorities are jittery about losing control of public opinion. Faced with unprecedented opposition that has taken to the Moscow streets, they are placing a strategic claim on the one independent broadcaster with ability to influence en mass. This causality is best explained by Putin himself. In onefamous interview from 2004, he told his interlocutor: "Authority, like a man, must always try, and the press, like a woman, must always resist." If anyone is capable of resisting, it is Ekho Moskvy.