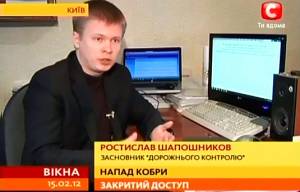 Journalists and media specialists are concerned that the closure of the website Dorozhny Kontrol ()) which monitors breaches of drivers’ rights could become the pattern for other forms of pressure on Internet publications.  They consider inadmissible the ruling by the Desnyansky District Court in Kyiv temporarily closing the entire website over a civil suit alleging defamation by H. Hetmantsev, Inspector of the Cobra Traffic Police against the owner of Roadcontrol, Rostyslav Shaposhnykov.

Mr Shaposhnykov says that the suit was brought over comments under articles. Anonymous users apparently left negative comments about Hetmantsev who asked the court to close the entire site.

Roadcontrol’s owner is convinced that this is an extremely dangerous precedent. “Such a thing has not happened in Ukraine before. No guilt has yet been proven, they have not proven unlawful actions. They can’t even provide at a legal level that I’m the owner of the site. Yet they are closing the site, have sent the ruling to the provider and he has to obey it”.

He suggests that any Internet publication can publish an article on any subject, and then some official can anonymously write some abuse of himself in order to then take the site to court and have it closed.

Until the main site starts working again, they are creating a website  - «Dorozhny Kontrol Partisans».

Taras Shevchenko, Director of the Media Law Institute, considers the court’s actions to be unacceptable and unwarranted.  He says it would have been quite sufficient to block access to specific pages in connection with the civil suit, but in no way to shut down the entire site.  There are mechanisms to prevent such extreme responses where printed outlets are involved, but the issue has not been regulated as far as the Internet is concerned.

Journalists and activists are planning to organize protests to demonstrate to the authorities that such actions are inadmissible and to draw attention to the case. .

From a report at