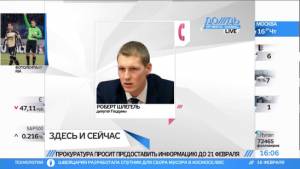 The Dozhd TV channel reports that the Prosecutor has asked for information about the channel’s sources of funding. It wants to find out who paid for broadcasts from the protest rallies “For Honest Elections” on Bolotnaya Square and Sakharov Prospect.

The document which Dozhd received says that the check is being carried out at the request of State Duma Deputy Robert Shlegel from the ruling United Russia Party.

The Prosecutor has asked for a large number of documents while Shlegel, who refused to join a live talk show claiming a heavy schedule said he wants to know whether there was foreign financing for their coverage.

The protests over election fraud were the largest seen in Russia since 1991.  On 24 December, for example, between 70 and 120 thousand people rallied in Moscow on Sakharov Prospect demanding new elections and that Putin go. Many of the demonstrators carried white ribbons, posters and balloons with the words “We’ve been cheated”.