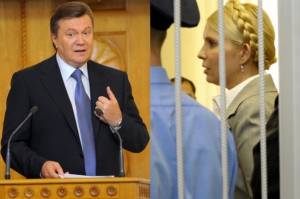 The urgent need traditionally expressed by Ukraine’s leaders to “improve the country’s image” abroad just when everything is falling apart can often appear comical. Humour is, however, thin on the ground when large amounts of taxpayers’ money are spent on efforts to conceal or do a cosmetic job on systematic destruction of democratic institutions and mockery of the rule of law.

Against a background of legislative initiatives enabling the Cabinet of Ministers to restrict a whole range of social benefits, it is difficult to feel amused by the use of 140 thousand USD from the State coffers on a supplement about Ukraine in the Washington Post   It in no way compensates for the wasted money, of course, but at least readers of the American newspaper should be in no doubt about the freebie received. They may not know about the gaping divide between words and reality, but they know that they’re being “sold” Ukraine according to the same rules as when they’re sold this or that appliance. Caveat emptor – let the buyer beware.

The situation is entirely different with the Ukrainian version of Euronews, although at first glance we seem to be dealing with an analogous use of public funding, this time, designated for the Kyiv budget to help children and the disabled. When the main television channels are deliberately muffling or distorting information of public importance and all means, including legislative, are being used to infringe freedom of expression, a high-quality and independent news channel, albeit with a limited audience, could play a positive role. The fact that this has not happened, that instead of at least providing an example of good journalism the Ukrainian version is casting a shadow over Euronews itself must be stated as loudly as possible so that viewers of other language versions are informed. Let them also beware. Any information product is measured by how balanced and many-sided its coverage is and is devalued by willingness to resort to cheap distortion to suit this or that customer.

There were few illusions even back in October 2010 when the agreement was brokered. Sure, Valid Arfush , Deputy Director of the National Television Company of Ukraine [NTCU], promised that “Euronews will not have a pronounced political line” and that there would be no “interference by regional representatives in the channel’s information policy”.  It was difficult to take such assurances seriously from the person who had publicly stated that the state-owned UTV-1 should be “pro-government” and give the viewers only positive information.

There remained a faint chance that Euronews was simply not aware of the record metamorphosis of UTV-1 into a mouthpiece of the current regime and persistent violator of all standards of honest journalism.  This took place under the leadership of Arfush and Yegor Benkendorf, General Director of NTCU and author of an overtly hagiographic film about President Yanukovych marking the latter’s 60th birthday. Perhaps the Euronews management were unaware of the warnings from Ukraine’s “Stop Censorship!” movement when they appointed Valid Arfush Chair of the Coordination Council of the Ukrainian version of Euronews, and Benkendorf also became a member together with Philippe Cayla, Chief Executive Officer and Michael Peters, Managing Director of Euronews.

A real test for any optimist was provided by the divergent Ukrainian and English reports of the protests in Kyiv on Independence Day, the day that the Ukrainian version was launched. A fair amount was written in both Ukrainian and in English, with the latter circulated by European journalist organizations. It seems inconceivable that the Euronews management knew nothing about highly relevant discrepancies between the two language versions.  .

At the time there were again assurances that there was no political bias and that there had just been some regrettable “mistakes”.

A letter has been sent to Euronews with information about a number of such “mistakes” over the last months where reports differ in the same way. An explanation would be appreciated as to the discrepancies in reporting on 11 November of the new charges against former Prime Minister Yulia Tymoshenko of tax evasion and concealment of foreign currency revenue.  Ukrainian viewers were informed only of the charges and the fact that her “supporters” were protesting, while English viewers learned that “Tymoshenko has denied all earlier charges against her and said her trial reflected a political vendetta waged by President Viktor Yanukovich, who narrowly beat her in a presidential vote last year. Echoing her position, the European Union has warned Ukraine it may not sign planned bilateral deals on political association and free trade if Tymoshenko remains in jail.”

Should we believe that they thought Ukrainians would know about the political motivation without explanation?  How when on the channel of Euronews’ Ukrainian partner, UTV-1 such words so distressing to those in power are assiduously avoided?

There is a considerable difference between Euronews and UTV-1 however, most regrettably, the same trend can be send of softening criticism of those in power, muffling or distorting information which could cause them embarrassment.

Viewers of other language versions of Euronews may be used to products of this nature – they come clearly labelled as advertising and have no place in news reports.