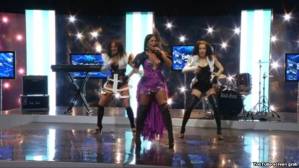 Ukrainian nationalists have denied insulting a singer of African descent amid a deepening scandal over the Eurovision Song Contest.

Yuri Syrotiuk, a spokesman for Ukraine’s nationalist Svoboda party, said he had never attacked Gaitana, a popular singer born to a Congolese father and a Ukrainian mother, for her skin color.

The scandal erupted February 20 when Syrotiuk said the 32-year-old singer should not stand for Ukraine at the pop contest because "she does not represent the Ukrainian soul."

Gaitana was selected on February 18 to represent Ukraine at the Eurovision finals in Baku, Azerbaijan, in May.

Many found the comments particularly misplaced since the singer, in her official Eurovision address, voiced hope that her song "Be My Guest" would help promote Ukraine as a "hospitable and friendly" country.

Like several Ukrainian celebrities -- including boxing champion Vitali Klitschko -- she has rushed to defend Gaitana, calling her one of Ukraine’s best candidates ever for the contest.

Gaitana herself publicly reacted to Syrotiuk’s remarks during a press conference in Kyiv on February 22, at which she appeared alongside Ruslana.

"I feel very ashamed of these racist comments because they destroy Ukraine’s reputation in the eyes of the whole world, " Gaitana said. "I know that a lot of Ukrainians are trying to convey a good image, we are doing everything so that Ukraine becomes part of the European family, so that no one is afraid of coming here."

The scandal comes just as the Council of Europe publishes a report deploring the lack of measures to fight rampant racism and xenophobia in Ukraine.