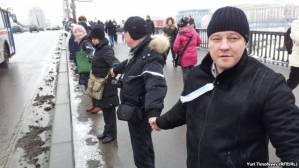 Thousands of people have joined hands to form a "Great White Ring" around Moscow city center in protest against Prime Minister Vladimir Putin, who is tipped to return as president in an election next week.

According to RFE/RL Moscow correspondent Tom Balmforth, the protesters lined up around the Moscow inner ring road on February 26 despite falling snow, with some drivers honking their horns in approval.

Balmforth described the atmosphere around the 16-kilometer Garden Ring Road as "festive, " with little police presence.

"I must have passed thousands and thousands of protesters, " he said. "They were all wearing white ribbons and a lot of them were clutching white carnations and white balloons -- obviously white being the symbol of the protest movement. Everyone was all very happy [and there was] lots of cheering."

Balmforth added that many of those in passing cars wielded placards in support of the Yabloko opposition party or displayed banners calling "For Free Elections." And they were beeping a lot as they went past."

Balmforth said the protesters themselves were not supposed to have placards and posters because Moscow authorities had not granted official authorization for the demonstration.

But opposition activists said the event attracted the 34, 000 people organizers estimated were needed to complete the chain along the Garden Ring Road.

"The authorities are scared of peaceful and proud people, " opposition leader Boris Nemtsov told Reuters television. "The authorities are afraid of the people they can’t buy. The authorities love flunkies, cynics, and people who are for sale. And those who stand there proudly and are not afraid of anything, they mean the end for the authorities. That is why the greater our number, the faster we will get rid of these thieves and swindlers."

’We Need A Change’

Yevgeny, a 56-year old army pensioner, stood near Mayakovskaya metro station. He claimed he used to support Putin, but that he got tired of him during his second term.

“Nothing large scale was achieved apart from [Putin’s] cosmetic operations and constant self promotion, " he said. "Now we need a change of authorities. Either that, or the next six years will be just like the last 12.”

Boris, a 33-year-old businessman, told RFE/RL that he would continue to demonstrate against the authorities unless they launch a crackdown.

"We want to speak and show that people are against the Putin and the system today and against dishonest elections, " he said. "That’s why we’re here."

The AFP news agency reported that some 3, 000 people also marched through St. Petersburg, chanting "Russia without Putin, " amid a heavy police presence.

An anti-Putin demonstration in Russia’s second largest city on February 25 had earlier attracted thousands of people.

Smaller anti-Putin demonstrations were reported on February 26 in the Siberian cities of Tomsk and Kemerovo.

Putin’s supporters fought back on February 26 by staging their own "Putin Loves Everyone" event on a central Moscow square with a Kremlin youth group handing out ribbons in the colors of the Russian tricolor flag.

Putin, who was president between 2000 and 2008, is widely expected to win against his four main challengers in the March 4 election.

An opinion poll last week indicated Putin, 59, would easily win the election in the first round, avoiding a runoff.


With reporting by AFP, AP, and Reuters