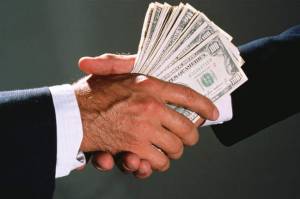 While the Finance Ministry works to assuage fears that Ukraine could be hurtling towards default, other members of Ukraine’s government and ruling majority in parliament appear to have other concerns. A considerable number of their initiatives of late have been aimed at ensuring that all those choice accoutrements of electoral office (luxury residences, vehicles, areas of land reserves, etc) remain well away from public scrutiny or the clutches of the law.

The Constitutional Court’s judgement on 20 January extending the definition of “confidential” information beyond any decent limits would seem to have filled some MPs with unlimited faith in that auspicious body. Since 8 February the Court has been considering a submission from 53 MPs from the ruling Party of the Regions aimed at removing one element of anti-corruption legislation that could most complicate their pre-election campaigning this year.  The MPs want a carte blanche to modestly conceal income and expenditure from 1 July 2011 when the actual law came into force. The grounds would seem very thin, but their faith in the Constitutional Court has not proven unwarranted over the last 2 years. .

These earnest efforts by MPs and Court to correctly interpret Ukraine’s Constitution have coincided with efforts to remove all but ink from the Law on Public Procurement.

A draft law (No. 9634) introduced by Prime Minister Azarov on behalf of the Cabinet of Ministers and passed as a base by the ruling majority on 9 February is yet another attempt to whip most purchases from out of the force of the Law. It will significantly increase what is allowed through “reduced” procedure, what is excluded from the law altogether and can be purchased from one bidder.  Most importantly, the procedure for checking such procurement would be approved by the authors of the draft law, the Cabinet of Ministers.

The explanatory note to the draft bill claims that it “has been worked out with international experts, including the World Bank and European Union.  One rather wonders whether the latter are aware of this.  Certainly previous attempts to render the law an empty shell have led to serious threats that cooperation will be suspended.  Hardly surprising given the number of years and huge amounts of European money poured into drawing up the anti-corruption legislation which Ukraine’s MPs are so zealous in trying to avoid implementing..

Moves to accelerate stop court cases dragging on for years and to set time limits can seem a good thing – or dead suspicious, as is the Finance Ministry’s order from 17.01.2012 which came into effect on 20 February.  According to the new Procedure for examination by the State Financial Monitoring Service of possible infringements of anti-money laundering legislation, sanctions can be imposed for 6 months from when the violation is uncovered but no later than a year after the law was violated. It depends what the infringements are, of course, but one year hardly seems long to lay low in order for seriously dirty money to be effectively declared fully laundered.

Serious doubts arise over another remarkable urge by the legislators for fast-tracking.  Law No. 9635, passed on 20 December, significantly reduces the time frame in which law suits can be appealed, for example, over unlawful seizure of State property or an agreement reached through the use of violence or deception.  The previous ten-year period was fixed because such deception, etc, does not necessarily become evident immediately.  The period has now been reduced to 3 years.  The same time limit has also been imposed on the previously indefinite right to demand that infringement of property rights by a State body be revoked. Roman Kuybida from the Centre for Political and Legal Reform is convinced that the law will pave the way for legitimizing a number of dubious court rulings, illegal seizures of land.  It will mean, just to mention one notorious example, that nobody will be able to demand that the President’s highly controversial residence at Mezhyhirya be relinquished.

It remains to be seen how many such initiatives any economy can endure. How many the public should tolerate is much clearer.