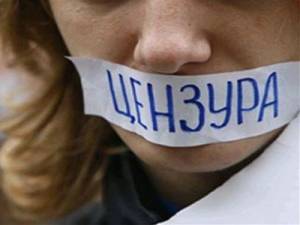 The Donetsk authorities have drawn up an Information Policy Strategy for the region which they say is aimed at changing the negative image of the region.  Local journalists consider it an instrument for increasing censorship on the media.

The Internet publication «Новини Донбасу».Donbas News reports that on 22 February a meeting took place in the Donetsk Regional State Administration of the Public Council under the Governor with members of the region’s municipal media outlets. This discussed an “Information Policy Strategy for the Donetsk region”.

According to the Governor’s Deputy Press Secretary, Olena Malyutina research shows that the associations people make with the Donetsk region are negative. “This is a region of oligarchs, bandits and other negative aspects. We therefore want to change this level of association to one which is positive and become the leader among other regions, using our unique opportunities”.

Presenting the Strategy, Malytina stated that it was based around “the message” of Shyshatsky declared during his “inauguration” as governor: a healthy economy; healthy society and healthy people.

The officials propose to train a pool of speakers on critical issues in order to circulate exclusive positive information.

Donbas News writes that behind all kinds of fashionable words and multi-coloured graphs the document is about establishing clear boundaries for regional journalists in their coverage of topics linked with the Donetsk authorities and legitimize journalists’ independent position”.

Journalists are convinced that the head of the Donetsk Regional State Administration Andriy Shyshatsky has decided to impose new rules for journalists.

There was a meeting on 10 February in the hotel owned by billionaire Party of the Regions MP Rinat Akhmetov Donbas Palace between the chief editors of local media outlets with Shyshatsky. They discussed general issues regarding the relations between journalists and the authorities.  In private conversations the editors say that they see the situation as being that either they’re on the side of the authorities or they’ll be hindered in all sorts of ways and won’t get commissions which are worth tens or even hundreds of thousands of UAH for covering various events. “Not to mention the lost budget which the authorities are planning to spend on supporting their candidates at the parliamentary elections”.