US and EU condemnation of Lutsenko verdict 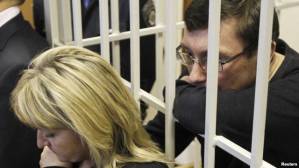 February 28, 2012
The United States is disappointed by the verdict in the trial of former Interior Minister Yuriy Lutsenko. The politically motivated prosecution of opposition leaders, including Mr. Lutsenko and former Prime Minister Yulia Tymoshenko, raises serious concerns about the Government of Ukraine’s commitment to democracy and rule of law. The United States again urges the Government of Ukraine to free Mr. Lutsenko, Mrs. Tymoshenko, and the other senior former government officials currently in detention, and believes that they should have an unrestricted ability to participate fully in political life.

BRUSSELS -- European Union officials have criticized a Ukrainian court decision to sentence former Interior Minister Yuriy Lutsenko to four years in prison after finding him guilty of embezzlement and abuse of office.

The court also ordered the confiscation of Lutsenko’s property. The ruling said Lutsenko failed to observe proper procedures in hiring and paying a close acquaintance while serving as interior minister from 2007 to 2010.

"I think it further proves the point that the legal system in Ukraine is now used to criminalize what are essentially political activities, " he said, "and sort of increases our concerns on that particular point."

"As far as I know, [Lutsenko] is being accused of a relatively trivial offense. And so it seems that this is a disproportionate and harsh system, " Sikorski said. "In other words, it is another argument for those who suspect the Ukrainian judicial legal system is not entirely free of political motivations."

Statement of the Czech Ministry of Foreign Affairs on Yuri Lutsenko

The Czech Republic has learned with concerns and displeasure the verdict of the Pechersk District Court in Kyiv, February 27, 2012 in the criminal case against Mr. Yuri Lutsenko. Former Ukrainian minister of interior was sentenced to four years of imprisonment.

As in the case of Ms Yulia Tymoshenko, we have to underline the fact that the trial was far away from respecting European standards of the Rule of Law and human rights principles. We consider the trial and the four-year imprisonment of Mr Lutsenko to be another evidence of selective and politically motivated justice in Ukraine and as a form of continuing political revenge against former government representatives.

We do believe that all political forces in Ukraine should be free from all politically motivated criminal prosecution, especially the one based on an obsolete Criminal Code, and should have a chance to take part in the upcoming parliamentary elections.

We will continue to monitor developments in both appeal processes with Mr Lutsenko and Ms Tymoshenko and similar cases.

The Czech Republic underlines that it supports the European integration ambitions of Ukraine but the condition for the progress towards this goal is that Ukraine acts as a fully democratic country respecting the Rule of Law.