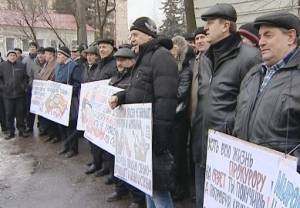 Former Chornobyl clean-up workers in Kharkiv have picketed the regional prosecutor’s office.  They assert that not only is the prosecutor failing to defend their rights and not ensuring that court rulings are enforced, but is also allowing the police to trump up criminal investigations against members of their movement.

There were more than 50 former Chornobyl clean-up workers at the protest. They say that they have at least two demands of the Regional Prosecutor.

They want court rulings regarding payment of their pensions in accordance with the law covering former Chornobyl clean-up workers.  They have the rulings on increasing their payments, but these are not being enforced because of a decision from the Cabinet of Ministers. They complain that the Prosecutor is not reacting to their complaints and not initiating investigations against those who fail to enforce the court rulings.

They also demand that criminal investigations be initiated against the investigators who began criminal files over alleged forgery of documents.  As a result activists were brought by force to the police and Prosecutor’s office.

The men’s lawyer, Volodymyr Tymoshenko, who proved to the court that these criminal investigations were unlawful is convinced that the files were deliberately falsified, and that the investigators infringed a whole range of articles of the Criminal Code.  He says that by refusing to respond, the Prosecutor is also complicit in concealing the crime.

The former Chornobyl clean-up workers said they were forced to protest outside since the Prosecutor had refused to see them.  While journalists were present, the men were invited in to see the Prosecutor.

As reported, On 3 February 2012 the Kyivsky District Court in Kharkiv overturned the decision to initiate a criminal investigation over alleged forging of documents confirming the status of former Chornobyl clean-up workers.

The criminal investigation was initiated following instructions from the Minister of Internal Affairs.  It was claimed that forged documents had been presented for 4 former Chornobyl clean-up workers to receive the pensions due people who took part in the clean-up.

With respect to the court rulings, the Constitutional Court in January issued another rather controversial judgement.  The Court stated that cases involving social payments can refer not only to Ukraine’s social legislation, but also to Cabinet of Ministers normative acts regulating the amounts of these payments. This specifically refers to a Cabinet of Ministers decision which makes procedure and size of payments dependent on how much money there is available.