On Ukrainian MFA’s unwarranted attack on Ambassador Pinto Teixeira“Everything is being done to kill Lutsenko”US and EU condemnation of Lutsenko verdictUkraine: PACE President calls for the release of Yuriy LutsenkoLutsenko Verdict still further dismantles the rule of law in UkraineEU Statement following the verdict against Yury LutsenkoPACE rapporteur says former Ukrainian Interior Minister is ‘victim of a political vendetta’YURY LUTSENKO SENTENCED TO 4 YEARS IMPRISONMENTInvestigators in trials of opposition leaders promotedLutsenko can lodge another suit against Pshonka in the USADanish Helsinki Committee on the sentence against Yuriy LutsenkoStrasbourg to hold public hearing in Lutsenko caseHuman rights monitors slam Prosecutor’s demand in Lutsenko caseLutsenko claims witness in his favour was dismissed from MIALutsenko alleges criminal offence and defamation by Prosecutor General’s Office InvestigatorLutsenko alleges 2 witnesses’ protocols falsifiedUS Court to consider Lutsenko’s law suit against Prosecutor General and othersCourt ignores PACE, refuses to release LutsenkoLutsenko “trial” hurtles on, unhampered by PACE or the right to fair court proceedingsJudge Vovk simply reads out testimony given earlier in Lutsenko trial
• Activity / Political persecution in modern Ukraine
• Topics / Politics and human rights
• Topics / The right to a fair trial 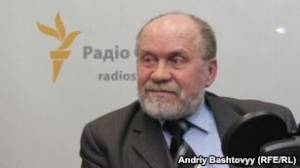 Volodymyr Butkevych, former Judge from Ukraine at the European Court of Human Rights (1997-2008)

He says that the Court in Strasbourg will not allow any country to not observe even minimum standards. In this case, as in the case of Yulia Tymoshenko, the argument that there is such legislation in Ukraine and nothing they can do about it will not be considered good arguments. Ukraine has ratified the European Convention and it has become part of Ukraine’s legislation, together with a law on implementing European Court judgments.

Asked about the possible reaction from European institutions to the Court in Strasbourg finding the cases of Lutsenko and Tymoshenko to be politically motivated, Mr Butkevych said that the Parliamentary Assembly of the Council of Europe is awaiting the court judgment.

“They don’t want to pre-empt the court, don’t want to pass some kind of decisions which could influence the court. I have no doubt that in the cases of Tymoshenko and Lutsenko violations will be found. Then there’ll be sanctions. And if in Ukraine they think that sanctions just mean that they’ll simply oblige a domestic court to review the rulings in the cases and that’s all, this is not the case because the sanctions will be serious,