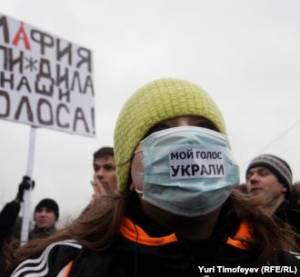 Russia's parliamentary elections in December were characterized by the opposition and observers from the Organization for Security and Cooperation in Europe (OSCE) as seriously flawed. Few were surprised.

But what did raise eyebrows was the response of tens of thousands of ordinary Russians who took to the streets to protest.

Why did so many, in a country notorious for political apathy, react so differently to violations well-known from votes in the past?

At least part of the answer appears to be how those violations were reported, and by whom.

The Russian case, analysts say, is a prime example illustrating that technologically-advanced, citizen-driven election monitoring has potential for impact beyond that of more traditional electoral observation by the government and international bodies.

Researchers like Lisa Kammerud of the International Foundation for Electoral Systems in Washington also maintain that the pairing of citizens and new technology for election monitoring is probably here to stay, both in Russia and elsewhere.

"The advent of the use of these new digital and personal technologies to monitor elections is definitely on the rise because the technology that's available now simply wasn't available before, " she says.

"And that's part of why this has definitely increased in the last few years. And there's no reason to think that it won't continue as more people have access to cell phones [and] personal devices that take videos and pictures."

According to Kammerud, these videos and pictures add "an element of immediacy that can't be underestimated."

"To trigger an international media response or to trigger an outcry among civilians within or outside your own country, it helps to have [visual evidence] of someone stuffing a ballot box, " she says.

Their ability to do so was enabled by the recent surge in the country's smartphone market. According to data from MTS, one of Russia's largest mobile phone operators, smartphone sales accounted for more than 20 percent of the mobile market by the end of 2011, up from around 8 percent in early 2010.

Gregory Asmolov, who reports on the Russian Internet for the website Global Voices, says a combination of other factors also helped ensure that December's citizen-based election monitoring had an impact.

Another technological advance of the last few years -- the rise of open-source, or freely modifiable, online mapping platforms -- was also key.

Thousands of reported violations from the election were collected and plotted online to the  a project maintained by the independent election-monitoring group Golos.

Asmolov, who co-founded "Help Map, " a platform used to coordinate assistance to victims of Russia's deadly 2010 wildfires, says the Golos project has tailored its mapping platform specifically to the Russian context.

It categorizes reported violations into common types, offers national and regional statistics, indicates if a complaint has been filed with the authorities, and allows users to upload alleged evidence.

​​A  submitted spread like wildfire on social media, prompting pledges of reform from the Kremlin.

Golos has maintained an election-violations database since 2008, Asmolov notes, but had never generated the level of public attention it did in December with its dynamic, public-generated map.

"I think the Russian [case] is one of the most advanced and one of the most significant examples of how [a crowd sourcing platform] can rocket and how it can really increase transparency and accountability, " he says.

"The fact that [the map] was attacked by [distributed denial of service] attacks and that it was one of the major issues on the [public] agenda shows to what extent the platform was valuable and significant, because otherwise, people would not discuss it and the government would not try to limit it."

Another factor in the mapping project's success, Asmolov says, is the penetration and relative freedom of the Russian Internet.

Reduced access to the Internet or government control likely reduced the impact of previous user-generated violation maps in Kyrgyzstan and Kazakhstan.

Other such mapping projects have been undertaken in Africa and Southeast Asia recently.

Jens Eschenbaecher, a spokesman for the OSCE's Office for Democratic Institutions and Human Rights (ODIHR), says citizen-based monitoring can "complement" his organization's work, but that the two should remain distinct.

"The two are complementary; they serve different functions, " Eschenbaecher says. "[NGO and citizen-driven monitoring] serve the transparency of the process and can lend confidence to the process, but we work differently as an international organization.

"We could not, for example, just immediately upload or provide information that we may receive. This is based on the methodology that we have developed over years. We double-check information we get from observers where we can."

Indeed, Asmolov says, improving the verification process for citizen-reported violations is the next challenge for projects like Golos's initiative. by a Kremlin activist after the December election, for example, shows her calling in a phony violation report to the organization.

Putin himself has tried to discredit the mapping project, claiming it represents foreign aims. On February 29, he also said he had "evidence" that the opposition would "stuff ballot boxes themselves, monitor that, and then report it."

On March 1, Russia's top investigative body said it had launched an investigation into several video clips allegedly pre-made to show phony evidence of vote-rigging during the vote.

The Kremlin has also touted a multibillion-ruble project to live-stream video from almost all of the country's polling stations during the March 4 presidential election, hoping to improve public perceptions of transparency.

"What I really hope is that we will see some type of collaboration between the governmental system and the citizen-based system of election monitoring, " says Asmolov, "but that depends on the political situation."

Citizens have already submitted more than 1, 200 electoral violation reports to the Golos map ahead of March 4, when Putin is widely expected to win in a landslide.