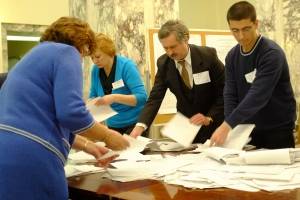 The OSCE observer mission reports that although candidates in Sunday’s presidential election in the Russian Federation were able to campaign unhindered, conditions were clearly skewed in favour of one of the contestants, current Prime Minister Vladimir Putin.

The observers noted that all candidates had access to the media, but the Prime Minister was given a clear advantage over his competitors in terms of media presence. In addition, state resources were mobilized at the regional level in his support. Also, overly restrictive candidate registration requirements limited genuine competition.

The election campaign was characterized by continuing and generally unobstructed large-scale protests over allegations of fraud during the December 2011 Duma elections. Demands for honest elections by citizens and candidates led to greater civic involvement in observation efforts to enhance the integrity of the process.

Voting on election day was assessed positively overall, but the process deteriorated during the vote count which was assessed negatively in almost one-third of polling stations observed due to procedural irregularities.

“This election showed a clear winner with an absolute majority, avoiding a second round. However, voter’s choice was limited, electoral competition lacked fairness and an impartial referee was missing. Due to increased citizen’s awareness and involvement elections were more lively, better managed and more seriously observed, whereas structural improvements in electoral regulation were proposed to Parliament – but not yet passed, ” said Tiny Kox, the Head of the delegation of Council of Europe’s Parliamentary Assembly.

“There were serious problems from the very start of this election. The point of elections is that the outcome should be uncertain. This was not the case in Russia. There was no real competition and abuse of government resources ensured that the ultimate winner of the election was never in doubt, ” said Tonino Picula, the Special Co-ordinator to lead the short-term OSCE observer mission and Head of the delegation of the OSCE Parliamentary Assembly.

“In this election, candidates could not compete on an equal footing. Although the authorities made some effort to improve transparency, there remained widespread mistrust in the integrity of the election process. As a first step, all allegations of electoral violations need to be thoroughly investigated. In an encouraging development, we have seen a great number of citizens taking part in overseeing the election. Their active involvement can be a powerful vehicle for increasing confidence in future elections, ” said Ambassador Heidi Tagliavini, the Head of the Election Observation Mission of the OSCE Office for Democratic Institutions and Human Rights (ODIHR).