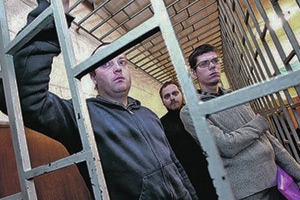 Well-known journalist Yury Lukanov has looked into the explosion in a Zaporizhya Church on 28 July 2010 and the subsequent investigation, arrests and prosecution of three young men.  The study is to be welcomed given serious grounds for concern over the case.

The home-made bomb exploded in the Svyato-Pokrovsk Church in Zaporizhya, wounding 6 people, one of whom, an 80-year-old nun died later in hospital.  There was apparently also damage to church property estimated at 400 thousand UAH.

The bomb exploded during the first visit to Ukraine of the Moscow Patriarch of the Orthodox Church, Kirill, a visit treated with unprecedented pomp and ceremony by the new regime under President Yanukovych.

A meeting was televised the very next day between Yanukovych and the then Minister of the Interior and Prosecutor General. The President demanded that the Prosecutor General immediately solve the case “establish the nature of this crime, what the bandits wanted to say by it”.

The Prosecutor General promised to solve the crime within seven days, and the media reported that the former head of the SBU [Security Service] had issued the same instruction.

On 6 August the then Minister of the Interior, Anatoly Mohylyov also reported to the President during a direct broadcast that the crime had been solved and that three people were in custody.  He asserted that their guilt had been proven by the testimony of witnesses and material evidence.

The case was passed to the court in October. The prosecution claims that Anton Kharytonov was dismissed from his post as sexton at the Svyato-Pokrovsk Church over unlawful conducting of rituals and theft of money. Anton believed that he had been unfairly dismissed. His elder brother is supposed to enter into a criminal conspiracy with Anton out of a wish to avenge his brother for his unfair treatment.  They are supposed to have decided to put a bomb in the church.  Serhiy is alleged to have bought the device, passed it to Anton who then gave it to a sexton at the church and his friend, Yevhen Fedorchenko. The latter is supposed to have been dissatisfied with the situation in the church and have therefore agreed to help them.  He is alleged to have put the bomb, set to go off at 6 o’clock in a sports bag left for the poor, and then taken it out and placed it in the church itself.

Olha Dyomina, mother of Anton and Serhiy, says that on 29 July around 12.00 a person who said that he was from the SBU [Security Service] rang Anton on his mobile. He asked for a meeting, saying that they were questioning all churchgoers about the explosion in the church, . He met with Anton in a park and spoke with him for a couple of hours. The next day, three police officers found Anton with his mother in the bank and asked them to come to the police station for Anton to look at some photos.  They were separated, and when she finally insisted on seeing her son at 9 in the evening, she was appalling to see that there were big holes in his trousers, where the pockets had been cut out. She believes that they cut them while Anton was wearing them as a form of psychological pressure. She asserts that they threatened to cut off his genitals if he didn’t sign a confession saying that he and his brother had blown up the church.

These trousers with the pockets cut out were caught on the video footage taken during the re-enactment of the crime, and were shown in court.

All of the police officers questioned in court claim that they don’t remember why Anton’s trousers were in such a state.

All three young men have retracted their confessions in court and stated that they were pressured into writing them.

Ryabukha now says that he has retired and doesn’t remember anything.

A number of complaints alleging torture of Anton Kharytonov were returned without any explanation from the Prosecutor General’s office to the Zaporizhya Regional Prosecutor.

A witness who claimed that he had constructed and passed Serhiy the detonator has since retracted this in court, saying that his evidence was beaten out of him.

Lawyer Oleh Veremiyenko says that his testimony is anyway absurd. At first the investigators claimed that the young men had themselves prepared the bomb. There is a video on which Serhiy very uncertainly describes how he supposedly made the bomb.

Yet the forensic report found that the construction which Serhiy described was not that which was in the actual bomb.

Oleh Veremiyenko says that all three young men have watertight alibis yet neither the investigators nor the court are taking them into account.

The investigators are now claiming that the explosive device was bought at a market.  There are now, Veremiyenko says, two mutually contradictory versions in the indictment. He says there are only the confessions which all the young men have retracted in court.

A version not considered

The religious community which the Svyato-Pokrovsk Church belongs to, owned a certain piece of land which they decided to sell to a Donetsk firm for 8 million UAH (around 1 million USD). The firm made a preliminary payment of 1 million UAH but then the community changed their mind. The court ordered that the million be returned to the firm.

The Bailiffs report that they had a writ for the money but this was withdrawn by the firm in October 2010, seemingly because by now the Svyato-Pokrovsk Church had handed the particular land over to the Ukrainian Orthodox Church under the Moscow Patriarchate and no longer owned it.  The firm thus never got their money back which the author suggests could be a reason for wanting revenge.  The explosion, he points out, happened a year to the day that the Economic Court ordered that the Pokrovsk Religious Community return the 1 million.

Oleh Veremiyenko notes that the highest leadership in the country had ordered the local enforcement bodies to catch the culprits immediately. The pressure to get results was enormous.

At the end of last year, similar orders from the President also resulted in record-speed arrests.  There has since been silence in that case, though the men are clearly still in custody. See Rubber Stamp Courts.