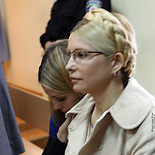 According to former Prime Minister and opposition leader Yulia Tymoshenko’s defence lawyer, Serhiy Vlasenko, the European Court of Human Rights has applied Rule 39 and ordered the government of Ukraine to treat Ms Tymoshenko in hospital.

The Court is part of the structures of the Council of Europe and its judgments and stipulations are binding on member states.

The European Court of Human Rights (the Court) decided on 15 March 2012 to indicate to the Ukrainian Government, under Rule 391 of the Rules of Court, to ensure that former Ukrainian Prime Minister Yuliya Tymoshenko receive adequate medical treatment in an appropriate institution.

Ms Tymoshenko, born in 1960, is the leader of Batkivshchyna, the main opposition party in Ukraine, and of Yuliya Tymoshenko’s Block. She was the Prime Minister of Ukraine in 2005 and between December 2007 and March 2010. Criminal proceedings were brought against her for allegedly making an illegal order for the signing of a contract concerning gas imports. On 11 October 2011, she was convicted as charged, including of abuse of power, and sentenced to seven years’ imprisonment and a three-year ban on holding public office. Her subsequent appeal on points of law is currently pending.

Her application was lodged with the Court on 10 August 2011. She alleges, in particular: that her criminal prosecution and detention were politically motivated; that there has been no judicial review of the lawfulness of her detention in Kyiv SIZO no. 13; and, that her detention conditions are inadequate, with no medical care provided for her numerous health problems. She relies principally on Article 3 (prohibition of degrading treatment or punishment), Article 5 (right to liberty and security) and Article 18 (limitation on use of restrictions on rights) of the European Convention on Human Rights.

On 30 December 2011 Ms Tymoshenko was transferred to the Kachanivska Correctional Colony in Kharkiv. On 14 March 2012 she applied before the Court for an interim measure, asking to be transferred to an appropriate medical institution in view of her health.

The Court decided on 14 December 2011 to give priority to the case - Tymoshenko v. Ukraine (application no. 49872/11) - in view of the serious and sensitive nature of the allegations raised. Notice of the application has been given to the Ukrainian Government who have been requested to submit observations by 22 March 2012.

This press release is a document produced by the Registry. It does not bind the Court.