Yevhen Zakharov: Speech in Parliament during the election of Ombudsperson 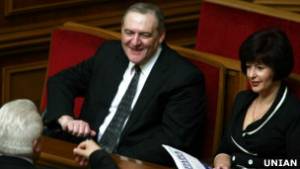 The address given by one of the candidates for the post of Human Rights Ombudsperson – Yevhen Zakharov, Co-Chair of the Kharkiv Human Rights Group and Head of the Board of the Ukrainian Helsinki Human Rights Union before the vote for Ombudsperson on 15 March. As reported, neither candidate gained the requisite parliamentary majority.

After greeting the Speaker of the Verkhovna Rada and the deputies, Yevhen Zakharov stated: “I have been involved in human rights work for 40 years, over the last 20 years on a professional basis. I have never been a member of any political party and am free from political influences.  I learned a long time ago from older friends – Larisa Bogoraz, Sergei Kovalyov, Yevhen Sverstyuk – the main principles of human rights protection: independence, especially from the authorities and from politicians; non-discrimination, which means defence of victims of human rights abuse regardless of their convictions and party affiliation; race; skin colour; ethnic origin; language; religion, etc.  And maximum honesty regarding information, saying only what I think and calling things by their real name.  This is what I would like to tell you.

If between 2005 and 2009 we reported that government policy on human rights was ineffective, unsystematic and chaotic, today we are forced to state that during the last two years there has been no such government policy at all, and human rights are not a priority for the leaders of the country. The norm of Article 3 of the Constitution, stating that the main duty of the State is to affirm and ensure human rights and freedoms seems a pure mockery. The authorities are clearly demonstrating contempt for human rights and flagrantly putting pressure on society, violating the Constitution and laws, the principle of rule of law, civil rights and political liberties; destroying the rudiments of judicial independence; turning judges into obedient implementers of others’ will.

The State is working solely on “improving the life already today” of its own elite, and treats other Ukrainians with humiliating contempt. We have not seen anything like it in 20 years of independence! At present a quarter of the population considers itself poor, while according to UN standards for Europe, 80% of the people are poor. The authorities pay no attention to criticism and at best merely imitate cooperation with the public. Instead of dialogue with the public as with an equal partner, they instead resort to political persecution of their opponents and protest movements, trying to intimidate them, using the law enforcement bodies and courts for this.  This is staggering, with the authorities acting as though there was no divine punishment!

I would say in other words that historical experience proves that a political regime which violates human rights ever more and more, is doomed. In these circumstances the government swiftly loses legitimacy. The present situation can be compared to a forest fire and therefore fighting worms on a particular tree to a large extent becomes senseless.  Undoubtedly, stopping human rights violations in specific cases is an important task for the Ombudsperson, however this or her first task at the present time is to obstruct the present systemic and widespread human rights violations and speak about the potential threats to human rights contained in the laws passed by decisions of the executive branch of power and bodies of local self-government. To this end the Ombudsperson must put legal questions about this before the Constitutional Court, actively using the Ombudsperson’s right to make constitutional submissions.

The Ombudsperson should publicly set out the main human rights issues in the country. I am certain that as of today that is the destruction of the foundations of the justice system. A strong, independent and fair judiciary is the main prerequisite for the protection of human rights. Without it human rights protection turns into a fiction. Saint Augustine said that a state without an independent court is not a state, but a pack of robbers.

The Ombudsperson should be active in the information realm and speak about threats to human rights. He or she should actively work with NGOs, create regional offices, specialist Ombudspersons on minority rights, the rights of the child; freedom of information and personal data protection; the rights of people in confinement with the relevant powers to significantly increase the number of people focusing on active protection of rights.

I hope to be heard, and show your our latest report which for the seventh year in a row has been prepared by human rights NGOs together. This is the report for 2011 and I wish to present this report to the Speaker of the Verkhovna Rada.

Thank you for your attention.