Liubov Kovalyova: Sentenced to death for telling the truthStop the Execution of Kanavalau and Kavalyou!PACE: last-ditch appeal for clemency for Dmitry Konovalov and Vladislav KovalevLukashenko refuses to commute death sentences over Minsk bombingEP calls for moratorium on death penalty in BelarusCalls for Belarus to commute death sentencesAppeal from Mother of one of the young men sentenced to death in BelarusAmmesty International expresses concern over Minisk bombing case verdictBelarus: Two young men accused of Minsk bombing sentenced to deathHelp stop a terrible miscarriage of justice in Belarus!Belarus: Stop murder – in the name of the people!Top EU diplomat defends measures against Lukashenko regimeBelarusian mass trials continue after fresh crackdown on protestersBelarus: Scores jailed or fined after anti-government protestsBelarus: Protesters dispersed with tear gas, many detainedBelarus ’blocks social media sites’ on national holidayBelarus: 15 days imprisonment for silent protestBelarus rounds up ‘Silent’ ProtestersBelarusian Police and KGB detain Revolution via social network activists and journalistsEU Tightens Belarus Sanctions
• Topics / News from the CIS countries

Belarus: ‘An irreparable act has been committed’ 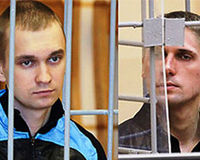 Strasbourg, 18.03.2012 – The President of the Parliamentary Assembly of the Council of Europe (PACE), Jean-Claude Mignon, has said he is appalled by the executions of Vladislav Kovalev and Dmitry Konovalov in Belarus, confirmed by several different sources today. “An irreparable act has been committed. The Belarusian authorities have once again remained deaf to the many calls of the international community for clemency. The death penalty is cruel and unnecessary, it is a barbaric practice that has no place in a civilized society, ” the PACE President said.

The Assembly had called on the Belarusian authorities several times not to execute MM. Konovalov and Kovalev, Mr Mignon pointed out, not only because the death penalty is wrong in principle but also because of the many questions about the fairness of their trial. The Supreme Court of Belarus had found the two young men guilty of the tragic bomb attack on 11 April 2011 in the Minsk metro.

The President expressed his condolences to the families of the executed.

Belarus’s "Special Guest" status at the Parliamentary Assembly was suspended in 1997 and cannot be restored until a moratorium on the execution of the death penalty has been decreed by the competent Belarusian authorities and until there is substantial, tangible and verifiable progress in terms of respect for the democratic values and principles upheld by the Council of Europe.

In Resolution 1857 on the situation in Belarus, passed on 25 January 2012, the Assembly deplored an investigation and trial “marred by serious human rights abuses”. Also during the session Lyuba Kavaliova, mother of one of the young men, addressed PACE’s Committee on Legal Affairs and Human Rights at the invitation of Marie-Louise Beck, rapporteur for opinion. On 27 January 2012, the PACE President also expressed “serious doubts” over the convictions of the two men and appealed against their execution.