Kharkiv journalists condemn harassment of A/TVK colleagueTriple Blow for Kharkiv TelevisionATN: Prosecutor finds no proof of pressure from local authoritiesMedia purges at the door“Removal from air of Kharkiv TV channels more than just business relations”EU following struggle for freedom of speech in KharkivProtests, delegation, letter to the President , yet ATN remains off airKharkiv Mayor awaits unpleasant questions about closure of TV channelsYoung Kharkiv residents demand the return of TV ATNOSCE calls on Ukrainian government to allow independent Kharkiv broadcaster back on airThe Removal from air of three Kharkiv channels damages Ukraine’s reputationKharkiv’s TV ATN files law suit against Sanitary ServiceAfter Kharkiv’s TV ATN who’s the next target?ATN journalists picket Mayor of Kharkiv’s officeMedia Union calls for resumption of broadcasting of blocked Kharkiv TV companiesOn Flagrant Violation of Freedom of Expression in KharkivATN to picket the Kharkiv Mayor’s Office after being taken off airKharkiv journalists call for defence of freedom of speechOn the removal from air of A/TVCATN TV channel accuses Kharkiv Mayor of obstructing its right to broadcast
• Topics / Freedom of expression 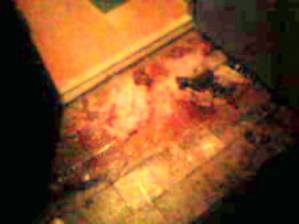 Photo from a mobile phone

The Internet publication Glavnoye reports what it calls the latest attempt at houding Director of the TV channel A/TVK, Yelena Barannyk.

Ms Barannyk says that she came home from work late to find the area in front of her flat covered with blood, with the remains of liver, entrails etc strewn over the landing.   She points out that somebody had taken a lot of trouble to do this.

This is the fifth attempt to harass Ms Barannyk.  The first was in January this year when a young man identifying himself as a member of a non-existent students’ union, tried to hand out leaflets to students of the institute where the A/TVK Director teaches.  The material flung dirt at her and was clearly aimed at getting the students against her.

The students were unimpressed and tried to find the young man who had immediately disappeared.

A similar attempt was made to blacken her reputation in the place where she lives.

These failed, the publication says, because both Ms Barannyk’s students and her neighbours know her.

But most disturbing is this latest incident with the blood.

Kharkiv journalists are planning an appeal to the Prosecutor General’s office demanding a reaction to the lack of action of the Kharkiv Prosecutor, Yevhen Popovych.

The television channel “Pravo-A/TVK”, which was removed from air on 14 September last year, has still not been able to begin broadcasting again. Yelena Barannyk as the Director of the television company has been fighting all that time to have the channel returned to Kharkiv screens.

From the report at Glavnoye