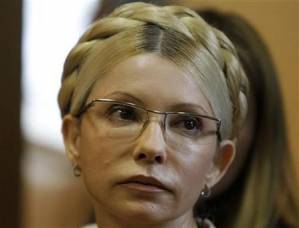 Ukrainian doctors have admitted that jailed former Prime Minister Yulia Tymoshenko is in need of hospital care as her health deteriorates.

Tymoshenko is serving a seven year sentence for abuse of office in a penal colony in Kharkiv, some 500 kilometers from Kyiv.

Tymoshenko has accused local doctors of denying her proper treatment and demanded foreign doctors treat her. Up till now, Ukrainian officials have denied Tymoshenko was ill or being mistreated.

"Now we can talk about the pain syndrome becoming chronic, " said Yuri Kotlyarevsky, head neurosurgeon of Kharkiv State Healthcare Department. "We do not reject this and are ready to carry [out treatment] in a hospital, in a specialised hospital outside the jail, using spiral computer tomography [a type of CT scan]."

Doctors also admitted that the delays in getting Tymoshenko hospital care meant that treatment would be different now.

"They [German doctors] said that yes, maybe in the beginning, in the beginning of the process it would make sense to talk about a surgical intervention. Now the situation is different, and they themselves offered this course of therapy which we are talking about today, but it excludes the surgical intervention, and we agreed, " explained Mykola Korzh, director of the Ukrainian Institute of Spinal Pathology.

Tymoshenko's relatives and supporters, as well as the European Court of Human Rights, have urged Ukraine's authorities to attend to Tymoshenko's health needs.

Supporters and much of the international community suspect the case against Tymoshenko is politically motivated with the aim of silencing a leading figure of Ukraine's opposition.

However, a majority in Ukraine's parliament voted on March 20 to back a motion accusing Tymoshenko of "high treason" for her role in negotiating a gas contract with Russia in 2009, the grounds for her jailing.

In December, the EU delayed the signing of a major trade agreement with Ukraine due to concerns over the jailing of Tymoshenko.

President Viktor Yanukovych has ignored calls to release Tymoshenko, who is now facing fresh charges dating back to the 1990s when the so-called "gas princess" ran a private natural-gas trading company, United Energy Systems of Ukraine.

Tymoshenko lost to Yanukovych in a tight presidential race in 2010.