EU Ministers to expand Belarus sanctionsInterview: Belarus Subway-Bombing Trial ’Like Some Kind of Phantasmagoria’Outrage over unfair trial and executions in BelarusCondemnation of executions in BelarusBelarus: ‘An irreparable act has been committed’Liubov Kovalyova: Sentenced to death for telling the truthStop the Execution of Kanavalau and Kavalyou!PACE: last-ditch appeal for clemency for Dmitry Konovalov and Vladislav KovalevLukashenko refuses to commute death sentences over Minsk bombingEP calls for moratorium on death penalty in BelarusCalls for Belarus to commute death sentencesAppeal from Mother of one of the young men sentenced to death in BelarusAmmesty International expresses concern over Minisk bombing case verdictBelarus: Two young men accused of Minsk bombing sentenced to deathHelp stop a terrible miscarriage of justice in Belarus!Belarus: Stop murder – in the name of the people!Top EU diplomat defends measures against Lukashenko regimeBelarusian mass trials continue after fresh crackdown on protestersBelarus: Scores jailed or fined after anti-government protestsBelarus: Protesters dispersed with tear gas, many detained
• Topics / News from the CIS countries 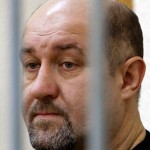 The UN Special Rapporteur on Torture has been asked to investigate allegations of torture against political prisoner Dmitry Bondarenko [Zmitser Bandarenka].

The NGO Human Eights Activists against Torture have sent an urgent complaint regarding suspicions that torture is being applied. The specific type of complaint is used in cases where intervention may be required to stop the actions.

The complaint points out that Bondarenko’s health is in a grave state following spinal surgery in September last year, and that the treatment he now needs cannot be provided in prison. They mention also that he has been refused disability status.  They have attached the necessary medical documents., as well as the assessment of an examination made by Ukrainian specialists Andriy Rokhansky.