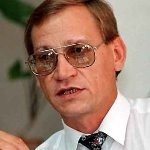 Eight people, four of them ex-police officers have been convicted of falsifying the material of the criminal case in which Yury Veredyuk was accused of murdering journalist Ihor Aleksandrov.

The Prosecutor General’s Office informs that the Luhansk Regional Court of Appeal on 20 March sentenced former police officers K. and H. to 7 and 13 years respectively for falsifying the material. H. was also convicted of murdering Yury Veredyuk.

Four other people were convicted over the falsification or of giving false testimony.

The Prosecutor General’s Office is examining the legality of the sentence.

Journalist Ihor Aleksandrov was attacked with baseball bats outside his TV channel TOR on 3 July 2001. He died of his injuries four days later.

He was the author of a TV programme in which former police officers from the Department for Fighting Organized Crime spoke about the links between the local criminal world and the law enforcement bodies. He did not live to broadcast the fourth programme in which he was supposed to reveal the names of high-ranking officials linked with criminals.

At that time, the present Prosecutor General Viktor Pshonka was Donetsk Regional Prosecutor and Viktor Yanukovych was Governor of the Donetsk region.  Pshonka initiated a criminal investigation and Yanukovych stated that he was taking the case under his personal control.

A down-and-out, Yury Veredyuk, was arrested and charged with Aleksandrov’s murder. The Prosecutor’s Office demanded that he be sentenced to 8 years’ imprisonment. However on 17 May 2002 the Donetsk Court of Appeal acquitted Veredyuk, released him and sent the case back for a second investigation.

On 20 May this ruling was appealed by Pshonka as Head of the Donetsk Regional Prosecutor’s Office.  The appeal was due to be examined by the Supreme Court on 11 July but was postponed until 25 July.

Later 12 men were arrested and in 2006 convicted of the killing of Ihor Aleksandrov, including people who figured in his publications – the Rybak brothers.