More victims of Donbas’ illegal minesDonbas Miners: Neither decent working conditions, nor a normal burialBlack Gold mixed with BloodYet more miners die in Ukraine’s minesUkraine’s Mines remain deadlyMiner who complained of inhuman conditions after mine disaster “transferred”Ukraine’s Miners: Put at Risk and ExploitedAnother methane explosion at a Luhansk region mineNo End to the Deaths in Ukraine’s Mining DisastersUnion blames Mine Owners for Fatal BlastRefined torment of minersReformers of the Mining Industry – Miners’ Opinion not needed?On illegal mines in the Donbass region and where the Police and other authorities are not lookingWere miners left to die after the explosion at the “Zakhidna” Mine?Main hero of illegal mining film savagely beatenMore victims of police protection of illegal miningRussian torture was particularly savage in Kherson oblast, with even teenagers imprisoned 63 bodies of Ukrainians tortured by Russians already found in liberated Kherson oblast ‘My mom wanted to take poison, but she learned from a letter that we were alive.’ The story of a doctor from Mariupol, part 2UN demands Russia pays Ukraine reparations as probe into Kherson war crimes begins
• Topics / Social and economic rights

Pit No. 8: Illegal Mines in Ukraine 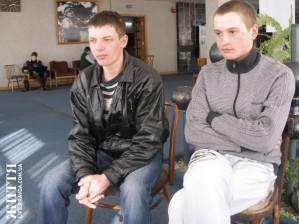 The subject of illegal mines in Ukraine usually only attracts attention when the frequent disasters attract media attention.  Their owners have been known to fill in mine openings without any real attempt to rescue men who may or may not have died in explosions underground  (See Black gold mixed with blood).

Towards the end of March, illegal mines or “kopanki” attracted public attention over the scandalously abrupt and unexplained removal of the film “Pit No. 8” from the contest at the documentary film festival Docudays.UA.

The film focuses on the experiences of 15-year-old Yura Skanov whose father killed himself and whose mother is an alcoholic.  To provide for his two sisters, Yura finds dangerous work mining the remaining coal in illegal mines.

This was not the message from the film’s producer nor its main heroes – Yura and Dima – who came to Kyiv as very special guests of  Docudays.UA.   The film had already been shown at 30 festivals and been well-received, with many prizes to its name. It was in Ukraine that they encountered problems, and major ones, with a co-producer suddenly announcing that the film was nonsense and pure fiction.

Marianna Kaat explained in an interview to Dzerkalo Tyzhnya that according to their contract, the Ukrainian co-producer has the exclusive right to commercial showings.  Despite the letters which the Ukrainian co-producer inundated the festival’s organizers with, only Ms Kaat has the rights over non-commercial showings. The latter assumed that reminding them of the contract conditions would be sufficient. Instead the festival organizers were sent a letter with insults aimed at Ms Kaat.

Ms Kaat explains that she was forced to remove the film from the framework of the festival. The film s now available on YouTube, though without English subtitles and illegally and Ms Kaat stresses that she did not put it there.

She adds that before people saw it, she read out the letter with insults asking, in particular, for help in defending herself from the media. She says that people’s reactions were the best indicator that she was right.

Yura and his two sisters are from Snizhne in the Donetsk region. The area is strewn with what are known locally as “holes”, or kopanki.  There are no concessions for age, and those who work in them do so under the constant threat of the mine caving in.

Marianna Kaat explains that the specific feature of this area is that the coal is very close to the surface, so special powerful technology is not required. It began being extracted simply by people wanting to heat their homes.  Then - illegal - business interests took over.

Yura’s mother was later deprived of her parental rights, and the girls ended up in children’s homes. For some time  Yura was in hiding, but he was eventually caught and put in a technical college. He has a plumbing certificate, but virtually no practice even during hist studies and is negative of chances of getting work in that field.

Ms Kaat says that she spoke to one of the girls and all is fine with her. Dima is presently working in a café, but Yura has received a vocation.  “I’m nonetheless glad that thanks to the attention of the human rights organizations that work with Docudays.UA, the children now have broad protection – everybody knows them.

“Previously I felt in a hopeless situation  – the children were constantly being summoned for questioning because of the film and I was in another country.

Admittedly, after one such visit to the police Yura said that they’d watched the film there and had even liked it.