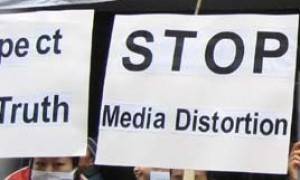 An international delegation of press freedom organisations, led by the World Association of Newspapers and News Publishers (WAN-IFRA) and the World Editors Forum, met on 3 April with Serhii Liovochkin, Head of the Presidential Administration of Ukraine, to discuss freedom of expression issues facing the country.

While welcoming a law guaranteeing access to information and the establishment of a presidential interagency working group on media freedom, with hope that these mechanisms would become increasingly effective and transparent, the delegation expressed concerns on a number of outstanding issues, including:

- An environment of corruption and lack of transparency that impacts the press, the judiciary and society as a whole;

- The need for a free market for a truly independent press to flourish;

- Lack of independence and pluralism of broadcasters and the politicisation of news coverage;

- Frequent cases of impunity and lack of prosecution for those who attack the media.

“One of the roles of a government is to foster an environment where a free press can flourish by being independent of governmental, political or economic control, ” said Erik Bjerager, President of the World Editors Forum, who called on the administration to ensure that Ukraine respects its international obligations on freedom of expression and freedom of the press.

The meeting with Mr Liovochkin, and the mission itself, comes in advance of WAN-IFRA’s annual World Newspaper Congress and World Editors Forum, the global summit meetings of the world’s press, to be held in Kiev from the 2 to 5 September next (http://wan-ifra.org/kiev2012).

The delegation expressed disappointment that President’s Viktor Yanukovych’s busy schedule did not allow him to meet personally with the participants. Mr Liovochkin apologized and said: “the president attaches special significance to dialogue” with the groups and is “interested in as close cooperation as possible.”

Mr Liovochkin also said the president was committed to fulfilling his promise on establishing public service broadcasting in Ukraine and moving the legislative process forward.

He said that the government is trying to create an economic system that supports freedom of the media, but the delegation noted that insufficient progress has been made and pledged to continue raising cases and violations of media freedom.

The delegation raised the case of murdered journalist Georgiy Gongadze, which remains unresolved. It was disappointed to hear that the investigation into who ordered his murder is at a dead end and called for an open and transparent process.

Eugene Abov, WAN-IFRA Board member and Vice President of the Russian Guild of Press Publishers (http://gipp.ru/)