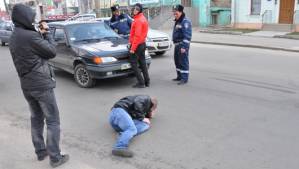 On 2 April at around midday a man in Mykolaiv deliberately drove his car into Vitaly Kosenko, a journalist from Dorozhny Kontrol [Road Control] – a website  (http://roadcontrol.org.ua/)) which monitors the work of the traffic police and breaches of drivers’ rights.

A few minutes earlier, Kherson journalists from Dorozhny Kontrol who were in Mykolaiv noticed a traffic police patrol car and headed over to it to take an interview of the inspectors.

While talking to them, the journalists noticed 2 half-filled-in protocols, exactly like those that they have found before in Zaporizhya.

They rang 102 and called for the traffic police officer on duty.

Instead of him, a “sportsman” arrived in a LADA with number plate: BE9764AH. He got out of the car, went over to Vitaly Kosenko and told him that he and his colleagues would not leave the city. He claimed that there was an ambush waiting to deal with the Dorozhny Kontrol journalists.

He then got in his car, turned the wheel to the left and sharply swerved in Vitaly’s direction, hitting him in the leg. He then deliberately knocked the journalist down. . Vitaly fell and hit his head on the bumper and asphalt.

The “sportsman” then tried to flee in reverse, but his car was blocked by Dorozhny Kontrol activists. The traffic police standing nearby did nothing.

An ambulance was driving past by chance, and stopped to take Vitaly to hospital.

A team of investigators and the Prosecutor’s Office are now investigating.

The Dorozhny Kontrol activists say that the whole thing was videoed and will be placed on the Internet.