Nigerian held in detention for 6 months after being attacked 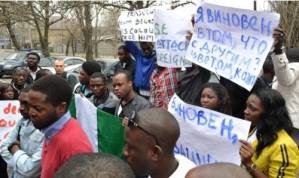 According to Yulia Krasylnykova from the Postup Human Rights Centre, the Luhansk Prosecutor’s has been holding a Nigerian national in the Luhansk SIZO [detention centre] because it supposedly can’t find an interpreter from and to English.

On 9 April a protest was held by around 40 African students and civic activists outside the Leninsky District Court in Luhansk demanding the release of Olaola Sunkami Femi, who is accused of trying to kill 5 people who attacked him in the entrance to his apartment block on 5 November 2011.

Ludmila Havrysh, Olaola’s lawyer, told the protesters that her client has not been able to read the file material since it is all written in Ukrainian or Russian which he doesn’t understand.

The third court hearing took place immediately after the protest however the examination of the case was again put off, this time until 3 May, since the Prosecutor could supposedly still not find an interpreter in order to communicate with Olaole.

There are a huge number of questions regarding this case.  According to Kostyantin Reutsky from the Postup Human Rights Centre, the lawyer apparently representing Olaola Sunkami Femi is refusing to appeal against his detention despite clear infringements of the European Convention on Human Rights, and the fact that the Prosecutor is obviously stalling.

According to a witness who was himself beaten up by those who are now being presented as the victims – four young men and two young women – they were set upon in the entrance area. Their assailants shouted racist insults, pulled them to the ground, kicked them and threw stones at them.  Olaola Sunkami Femi managed to get up and began defending himself with glass from a broken bottle.  The assailants backed off, but at that point the police finally arrived, and the assailants turned into “victims”.