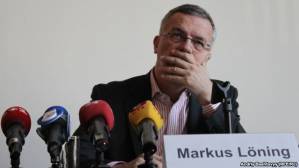 Germany’s Human Rights Ombudsperson Markus Lönung considers the trials of former government officials to be politically motivated. He was speaking after meeting with Ukrainian human rights activists, the relatives of former officials in prison and after a two-hour talk with former Interior Minister Yury Lutsenko.

Markus Lönung called what is happening in Ukraine “a step backwards” and a huge disappointment. He noted a considerable deterioration in press freedom and freedom in expressing views in the media, as well as restrictions on freedom of assembly.

He has given particular attention to the prosecutions of former members of the government and considers these to be politically motivated.

“I must say that after meetings, and my conversation with Mr Lutsenko, I am shocked at how these trials were run, without honest accompaniment and without timely medical.  I want therefore to call on the Ukrainian government to immediately give him the proper medical assistance, and that those imprisoned, if they need it, are given access to international groups of doctors”.

Markus Lönung arrived in Ukraine on 11 April in order to get an on the spot idea about the human rights situation.

He visited the Lukyanivsk SIZO where he was shown the cell in which Yury Lutsenko had been held. In fact, Mr Lutsenko later told him that he had been held in that cell only two days. The rest of the time (since 26 December 2010 – translator) the former minister was in a cell where the toilet “is a hole in the floor”.

Markus Lönung says that Yury Lutsenko did not complain about the conditions and explained that these are the conditions for all those held in SIZO [detention units], and that the problem needs to be addressed in systematic manner.

Markus Lönung promises that Germany will provide the necessary assistance if a decision is taken to treat former Prime Minister Yulia Tymoshenko in Germany.