Serious concern over the health of Belarusian political prisoner Dmitry BondarenkoUN asked to intervene in case of Belarusian political prisoner Dmitry BondarenkoEU Ministers to expand Belarus sanctionsInterview: Belarus Subway-Bombing Trial ’Like Some Kind of Phantasmagoria’Outrage over unfair trial and executions in BelarusCondemnation of executions in BelarusBelarus: ‘An irreparable act has been committed’Liubov Kovalyova: Sentenced to death for telling the truthStop the Execution of Kanavalau and Kavalyou!PACE: last-ditch appeal for clemency for Dmitry Konovalov and Vladislav KovalevLukashenko refuses to commute death sentences over Minsk bombingEP calls for moratorium on death penalty in BelarusCalls for Belarus to commute death sentencesAppeal from Mother of one of the young men sentenced to death in BelarusAmmesty International expresses concern over Minisk bombing case verdictBelarus: Two young men accused of Minsk bombing sentenced to deathHelp stop a terrible miscarriage of justice in Belarus!Belarus: Stop murder – in the name of the people!Top EU diplomat defends measures against Lukashenko regimeBelarusian mass trials continue after fresh crackdown on protesters
• Topics / News from the CIS countries 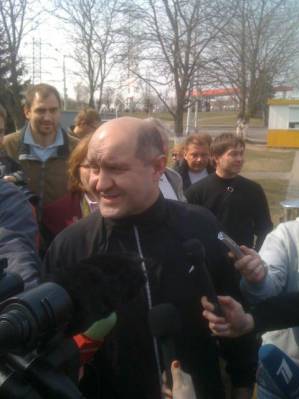 Dmitry Bondarenko, leader of the civic campaign “European Belarus” and authorized representative of Presidential candidate in 2010, Andrei Sannikov, has been released from prison. This comes a day after the release of Andrei Sannikov.

Mr Bondarenko was sentenced to 2 years imprisonment for taking part in a peaceful protest on 19 December 2010 over presidential elections  which the international community has condemned as seriously flawed. He was being held in Colony No. 15 in the city of Mohylev and there had been grave concern about his state of health.

Largely for health reasons, both Andrei Sannikov and Dmitry Bondarenko made formal requests to Lukashenko to be pardoned.

There are a large number of political prisoners in Belarus, some of whom have already stated that they will not ask for any pardon.

Photos and news of the release from Charter 97