Belarus: Dmitry Bondarenko freed!Serious concern over the health of Belarusian political prisoner Dmitry BondarenkoUN asked to intervene in case of Belarusian political prisoner Dmitry BondarenkoEU Ministers to expand Belarus sanctionsInterview: Belarus Subway-Bombing Trial ’Like Some Kind of Phantasmagoria’Outrage over unfair trial and executions in BelarusCondemnation of executions in BelarusBelarus: ‘An irreparable act has been committed’Liubov Kovalyova: Sentenced to death for telling the truthStop the Execution of Kanavalau and Kavalyou!PACE: last-ditch appeal for clemency for Dmitry Konovalov and Vladislav KovalevLukashenko refuses to commute death sentences over Minsk bombingEP calls for moratorium on death penalty in BelarusCalls for Belarus to commute death sentencesAppeal from Mother of one of the young men sentenced to death in BelarusAmmesty International expresses concern over Minisk bombing case verdictBelarus: Two young men accused of Minsk bombing sentenced to deathHelp stop a terrible miscarriage of justice in Belarus!Belarus: Stop murder – in the name of the people!Top EU diplomat defends measures against Lukashenko regime
• Topics / News from the CIS countries

On the situation in Belarus 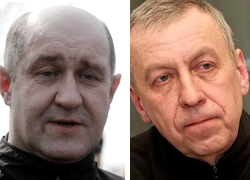 We welcome the long awaited release of former presidential candidate Andrei Sannikov and his authorized representative, Coordinator of the "European Belarus" Dmitri Bondarenko.

We must, however, point out that at least 13 Belarusian political prisoners - Ihar Alienevich, Mikalai Autukhovich, Ales Bialiatski, Dzmitry Dashkevich, Mikalai Dziadok, Aliaksandr Frantskevich, Siarhei Kavalenka, Eduard Lobau, Artsiom Prakapenka, Pavel Seviarynets, Mikalai Statkevich, Pavel Syramalotau and Yauhen Vaskovich -  are still being held in prisons and other places of detention. There must be an end to persecution of all Belarusian opposition politicians, civil and human rights activists.

We urge the Belarusian authorities to immediately release all political prisoners and withdraw the charges against them. We are convinced that prosecutions over the events of 19 December 2010, are not in keeping with international standards for a fair trial, and the sentences passed were politically motivated.  We also call for an immediate moratorium on the use of the death sentence.

Аndrey Kalikh, Centre for the Development of Democracy and Human Rights, Russia