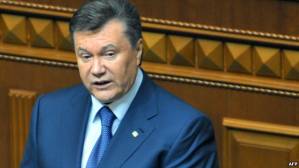 Viktor Yanukovych is not only president of Ukraine but the country’s best-paid author as well, according to a recent declaration on his website.

Ukrainian President Viktor Yanukovych has never been known as a man of letters.  He famously misspelled "professor" when listing his academic title during a failed presidential bid and once praised the residents of Lviv for their remarkable "genocides" when he actually meant to say "gene pools."

And in December 2010, he momentarily forgot the Ukrainian word for fir tree -- "yalynka" -- falling back on the Russian "yolka" instead.

So it’s come as a surprise to some that the notoriously ineloquent Yanukovych has emerged as Ukraine’s best-paid author.

An income declaration published on his presidential website claims that in 2011 Yanukovych earned more than 16.4 million hryvnyas ($2 million) in copyright fees for numerous books, including "A Year in Opposition, " "A Year in Office, " and "How Ukraine Should Live Further, " as well as any books he may pen in the future.

With that $2 million payout -- courtesy of the Donetsk-based publisher Noviy Svit -- Yanukovych’s single-year earnings put him comfortably in the ranks of another presidential author, Barack Obama, who earned $2.5 million in royalties from his books in 2008, the year of his election as U.S. president.

Not surprisingly, it also makes Yanukovych one of the highest-paid authors in Ukraine, a country where the average salary is just $300 a month.

Irene Rozdobudko, an award-winning Ukrainian journalist and author of such novels as "The Lost Button, " says she finds Yanukovych’s reported book earnings hard to believe.

"In Ukraine, this situation is impossible for any writer because authors’ fees and royalties are very small, " Rozdobudko says. "This is an example of our corruption. We have authors who are on a level with William Faulkner, who are recognized around the world. But I don’t think they’ve ever been paid so much."

’Did He Write A Single Line?’

Yanukovych, whose hardscrabble upbringing and early criminal convictions have led to more contemporary claims of corrupt privatization deals and abuse of office, has attempted to deflect attention from his $2 million paycheck by announcing plans to contribute his literary earnings to charity.

​​On April 15, Yanukovych said his profits would be used exclusively to help "sick people, and primarily children."

Presidential largesse aside, many writers say they remain perplexed by Yanukovych’s earnings because of the deeply dubious quality of his writing.

His most recent book, an English-language paean to Ukraine’s investment possibilities called "Opportunity Ukraine, " caused ripples following its release last autumn after entire portions of the book appeared to be plagiarized.

Andriy Kokotyukha, a screenwriter and the author of popular detective novels and a series of books for teens, says he’s skeptical that the president ever set fingers to keyboard during the creation of his books.

"I’m not sure [Yanukovych] wrote a single line himself, " Kokotyukha says. "But if he patented all of his gaffes, such as ’yolka, ’ and received royalties every time they were used, then he would make much more than 16 million hryvnyas."

A Copy For Everyone!

Allies of Yanukovych have defended his outsize earnings as legitimate, saying Ukraine operates according to a market economy and that no publishing house would make payouts without a guaranteed return.

But others say they question who, precisely, is buying Yanukovych’s books. Ukrainian bookstores rarely carry the presidential tomes, and in the case of "Opposition Ukraine, " at least one determined reader had to travel to the Vienna-based publisher to track down a copy. ("Opposition Ukraine, " as opposed to Yanukovych’s other books, was not published by Noviy Svit.)

Vasyl Shklyar, whose 2011 novel "Black Raven" looks at the Ukrainian resistance movement in the 1920s, says there is one way -- albeit a not very realistic one -- in which Yanukovych could, in fact, have legitimately earned his $2 million paycheck.

"To make so much money in royalties, he would have to sell two copies of his book to every Ukrainian, including children, old people, and blind people, " Shklyar says.