On the situation in BelarusBelarus: Dmitry Bondarenko freed!Serious concern over the health of Belarusian political prisoner Dmitry BondarenkoUN asked to intervene in case of Belarusian political prisoner Dmitry BondarenkoEU Ministers to expand Belarus sanctionsInterview: Belarus Subway-Bombing Trial ’Like Some Kind of Phantasmagoria’Outrage over unfair trial and executions in BelarusCondemnation of executions in BelarusBelarus: ‘An irreparable act has been committed’Liubov Kovalyova: Sentenced to death for telling the truthStop the Execution of Kanavalau and Kavalyou!PACE: last-ditch appeal for clemency for Dmitry Konovalov and Vladislav KovalevLukashenko refuses to commute death sentences over Minsk bombingEP calls for moratorium on death penalty in BelarusCalls for Belarus to commute death sentencesAppeal from Mother of one of the young men sentenced to death in BelarusAmmesty International expresses concern over Minisk bombing case verdictBelarus: Two young men accused of Minsk bombing sentenced to deathHelp stop a terrible miscarriage of justice in Belarus!Belarus: Stop murder – in the name of the people!
• Topics / News from the CIS countries 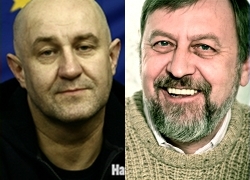 The news travelled fast last weekend in Belarus and beyond that Andrei Sannikov and Dmitry Bondarenko had been freed. Initially, it appeared incredible that Europe’s last dictatorship had decided to release two of its most outspoken domestic critics. But Sannikov, who had opposed Belarusian strongman Alexander Lukashenko in the 2010 presidential elections, and his long-time aide, Bondarenko, were welcomed by dozens of their supporters in Minsk. Who exactly are these two men, how did they draw the ire of Lukashenko, and why were they released now?

Sannikov and Bondarenko make for an unusual pair. Sannikov — a soft-spoken, polyglot intellectual — made his name in diplomacy as the chief negotiator of his country’s nuclear disarmament after the collapse of the Soviet Union. He resigned as deputy foreign minister in 1996 to protest Lukashenko’s dictatorship, and joined the democratic opposition, where he soon emerged as one of the key leaders. Bondarenko — a former athlete (swimmer) who served at the Soviet special forces — directed a popular radio station, which was later taken off the air for its criticism of the government. He joined the democracy movement, organized non-violent protests, and inspired a generation of young activists.

Their paths crossed in 1997, when both were among the initiators of the Charter 97 declaration. One year after a controversial referendum had paved the way for Lukashenko’s dictatorship, the declaration — which had some 100, 000 signatories — called for “devotion to the principles of independence, freedom and democracy, respect to the human rights, solidarity with everybody, who stands for the elimination of the dictatorial regime and the restoration of democracy in Belarus.” As an offshoot, Sannikov and Bondarenko also initiated charter97.org, a news portal that has since become the centerpiece of the independent media movement in Belarus.

Ten years later, the pair co-founded European Belarus to support democratic reforms, respect for human rights, and European integration. It was as a candidate of this movement that Sannikov decided to run in the 2010 presidential elections. Helped by Bondarenko and a committed team of young activists, he collected over 150, 000 signatures in support of his candidacy, crisscrossed the country to speak to packed halls, and appealed to many more during the limited air time allotted to him. Tireless campaigning eventually made him the leading opposition candidate. Hopes were high that after the unusually open pre-election atmosphere, the Belarusian regime would also permit some liberty on polling day.

Those hopes were brutally smashed by Lukashenko. The ballot was rigged much like earlier elections, with an improbable 80 percent of the votes going to the dictator. When Sannikov, Bondarenko, and other democrats responded by leading tens of thousands in peaceful protest, police attacked them mercilessly. Protestors were beaten, arrested, and put on show trials. Sannikov was handed a five-year prison term and Bondarenko two. But worse was still to come. For 16 months behind bars, Sannikov and Bondarenko endured grueling physical and psychological duress, judging from the little we know. The Belarusian terror apparatus tried to make them admit their “guilt, ” inform on their friends and, in the case of Bondarenko, agree to collaborate with the KGB. Their lawyers and families were prevented from making regular visits, Sannikov almost lost his 4-year-old son to state custody, and Bondarenko was denied rehabilitation after a spinal surgery in prison. When the prisoners did not relent, the pressure increased until Sannikov, to protect his family from state threats, signed a clemency request, which Bondarenko followed out of solidarity. Yet it still took several months before both were freed.

The pictures of the two after their release show them to be physically worn, but their statements reflect their remarkable mental strength and courage to continue their struggle. Their efforts remain necessary since, as both acknowledged, about a dozen political prisoners remain in custody, while others, including Sannikov’s wife, have a suspended sentence of imprisonment or are banned from travelling abroad. Hundreds, including Bondarenko’s daughter, are also awaiting their safe return from political exile. And even after these basic conditions are met, the democratic structures Lukashenko abolished must still be reinstated.

Europe’s support will be critical for Sannikov, Bondarenko, and their fellow democrats in Belarus. The EU should start by acknowledging that their release was the first success of its shift towards a tougher policy. After years of indifference, wavering, and often naïve engagement with the Lukashenko regime, Europe has begun to define a principled position in support of Belarus’ beleaguered democrats, and has shown readiness to impose harsh political and economic sanctions on Minsk. It must now continue its pressure on Lukashenko. Only then will the sacrifices of Sannikov, Bondarenko, and others pay off for Belarus.

Pavol Demes is Senior Transatlantic Fellow and Joerg Forbrig is Director of the Fund for Belarus Democracy at the German Marshall Fund of the United States.