Victims of Chornobyl: past and present 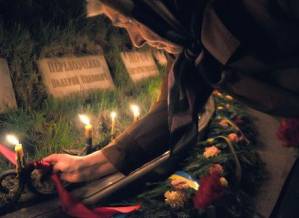 More than 200 members of the organization laid flowers at the Memorial to the Former Chornobyl Clean up Workers in the Sviatoshynsk District.  Flowers were laid by the survivors of the 731st battalion which was formed from people in the Kyiv oblast who worked at the station from 27 April to 23 May 1986.

“The present government has not kept one promises made to the former Chornobyl clean-up workers. Of seven hundred members of our battalion, less than a hundred are still alive, of whom half have pitiful pensions. We are all undergoing treatment at our own expense.  And for the clean-up workers who get a minimum pension, virtually everything goes on the monthly medical package of medicines”.

“There are not so many former Chornobyl clean-up workers alive and they sacrificed their health to save Kyiv and Ukraine from nuclear catastrophe and deserve human treatment and free healthcare.”

“We have been on hunger strike many times, held protests, the government as represented by Serhiy Tihipko and Mykola Azarov last year promised to resolve our problems, but didn’t resolve anything. We therefore warned them that we didn’t want to see them near the Memorial”.

The Head of “Nobody but Us”, Oleksandr Kovalyov told journalists that they had not put aside the struggle for their rights, but that on this day (the anniversary of the Chernobyl Disaster, they were remembering those others.

On 26 April around two thousand people took part in a remembrance meeting and protest outside the Cabinet of Ministers.  The gathering began with prayers in memory of those who died as a result of the Chornobyl Disaster. Those present presented their ultimatum to the government, but received no response.

According to the protesters, most of those present are not receiving the amount of social assistance which the Cabinet of Ministers claims.  Some are even facing the threat of having funding taken away altogether.  Volodymyr Nesterenko, for example, over the last 26 years has lost some of the documents which confirmed his status as a former Chornobyl clean-up worker.  He says that they’re cutting pensions. Some of his documents are in one state body, some with the SBU [Security Service] and they’re trying to prove that he wasn’t at Chornobyl.

From reports at UNIAN and Radio Svoboda.  Photo from UNIAN