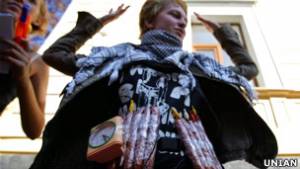 The lawyers and wives of three members of the ultra-rightwing organization “Patriot of Ukraine” who are charged with preparing a terrorist attack are demanding that a judge from the Kyiv—Sviatoshynsk District Court is replaced.  They assert that he is not impartial in his running of the trial.

The Security Service [SBU] assert that at the end of August 2011 they searched the organization’s office in Vasilkiv (Kyiv region) and found a homemade explosive device filled with various screws, etc, as well as “leaflets with extremist content”.  The three men are charged with planning a terrorist attack in a Kyiv region town on Independence Day, public calls to commit such acts of terrorism and unlawful preparation of an explosive device

The activists say that the items were planted and categorically deny preparing any terrorist attack.

After the criminal investigation was initiated, Yevhen Komisar, leader of the Kyiv branch told the BBC Ukrainian Service that what he called the provocation had been aimed not simply at dealing with the nationalist opposition, but at spreading fear among Ukrainians that there are some kind of terrorist gangs and that the regime is fighting them.

A spokesperson for the SBU, Marina Ostapenko denied that there was any politics involved.  The men are all being held in a SIZO [detention centre]

The press conference on Friday unfortunately coincided with a series of bombs set off in Dnipropetrovsk.  Thankfully nobody seems to have been seriously injured, and nobody has admitted responsibility.

The explosions made world headlines, pushing out, at least temporarily, stories about western responses, including cancellation of visits over the alleged beating and hunger strike of former Prime Minister Yulia Tymoshenko.