Russian police clash with demonstrators trying to march on Kremlin 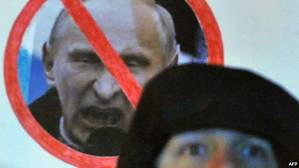 Moscow police say they have detained at least 400 protesters, including three opposition leaders, at a mass opposition rally in the capital on the eve of Vladimir Putin’s inauguration as Russian president for a third term.

Police clashed with a group of protesters led by Left Front leader Sergei Udaltsov and well-known anticorruption blogger Aleksey Navalny that broke off from a 20, 000-strong sanctioned demonstration and tried to march on the Kremlin.

Udaltsov, Navalny and another opposition leader, Boris Nemtsov have been arrested during the clashes.

Russian news agencies said that at least 12 riot police have also been injured.

Police used megaphones to order demonstrators at the sanctioned demonstration to leave the area and return to their homes, before the start of the confrontation.

According to RFE/RL’s correspondent in Moscow, Tom Balmforth, some protesters threw projectiles at the security forces.

"Protesters started hurling plastic bottles, some were even throwing rocks at the police, " he said. "And then they started to retaliate and they moved in and basically would brutally beat people with batons and try and move them around, to try and break them up.

"But people weren’t really moving and the sheer numbers meant that they could not really get everyone to leave."

There were also reports that police used tear gas against the protesters.

Police cordons have been thrown up around Red Square and other areas leading to the Kremlin.
Sergei Mitrokhin, leader of the liberal Yabloko Party, sharply criticized the protesters’ breakaway action. He said the conflict with police was "plainly stupid" and that such actions would lead to fewer and fewer participants in future protests.

Mitrokhin told journalists that 90 Yabloko activists had been detained, although none were involved in the breakaway attempt.

"They were taken directly from [the main demonstration] for absolutely no reason, " he said.

’March Of A Million’ People

The unrest came as the opposition was holding a so-called "March of a Million" people to protest Vladimir Putin’s May 7 inauguration for a third term as president.

"On the eve of the inauguration of Vladimir Putin, we are gathering to go out and say ’we don’t need an illegitimate government, ’" Udaltsov said. "We don’t need a so-called government that intends to plunder and destroy Russia for another six years."

"We are against the Putin mafia group usurping power, " he said. "We think it’s a tragedy for Russia, that there’s no chance of a successful future in the country with this gang.

"We’re for honest government in Russia without Putin, for new parliamentary and presidential elections, so that constitutional norms and rules are observed, so that political prisoners are freed."

’The State Is Falling Apart’

In comments to RFE/RL, demonstrator Vladimir Lebedev indicated his frustration with corruption under Putin.

"I am opposed to Putin because the state is literally falling apart, " he said. "Corruption is eating away at the entire society. There is no legal system. Of course, there is no rational economic policy. Money is disappearing like water through our fingers into unknown pockets. That’s what is happening."

Earlier on May 6, additional opposition rallies were also held in other Russian cities.

In Tomsk, about 150 people marched through the center of the city.

In Vladivostok, six demonstrators were detained and released, with two organizers facing up to 15 days detention for an unsanctioned rally.

A few dozen demonstrators were also reported in Kemerovo.

Meanwhile, several thousand Putin supporters gathered in Moscow’s Victory Park in an unsanctioned "celebration." A city official said the group did not need permission because they were holding "a cultural event" rather than a demonstration.

Several independent media outlets, including the newspaper "Kommersant" and the radio station Ekho Moskvy, have reported that their websites are undergoing intense denial-of-service (DOS) attacks.