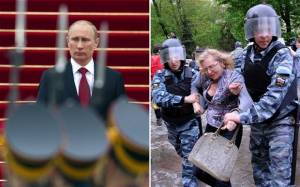 While the former prime minister was being sworn in for a third term in a pomp-filled ceremony at the Kremlin, riot police were disrupting pockets of demonstrators who gathered peacefully against his rule in the city.

Security was tight a day after a march of tens of thousands of Russians through Moscow which ended with violent clashes between police and demonstrators. About 80 people were injured and 450 detained in that confrontation, including opposition leaders Alexei Navalny and Sergei Udaltsov.

Central streets were emptied and metro stations closed on Monday in anticipation of further unrest, so Mr Putin’s cortege sped to Red Square along silent boulevards. Off his route, police trucks trundled towards small groups of protesters wearing white ribbons, the symbol of Russia’s disparate opposition.

At the Kremlin, the 59-year-old former KGB officer was met by a red carpet, an honour guard and a sumptuous hall full of approving dignitaries.

Outgoing one-term President Dmitry Medvedev took the podium first to give a bathetic speech claiming he had strived to make the authorities more open to dialogue with society during his four year term, and talking of the unifying power of love for children.

Mr Putin then made his vow with a hand on the constitution. He said he was inspired by "service to the Fatherland" and promised to work to improve wellbeing and security for all Russians.

"We’re entering a new stage in our national development, " he said. "We’ll have to address tasks that are of a totally different level and scale. The next few years will define the future of Russia for decades ahead."

He added: "We want to live in a democratic country, where every person has the freedom and space to apply their talent and labour."

Silvio Berlusconi, the former Italian prime minister, who received a personal invitation from Mr Putin, was the only prominent foreigner present at the ceremony. Arnold Schwarzenegger, who was also said to have been invited, did not appear to be present.

He was later blessed in a service by Patriarch Kirill, the head of the Russian Orthodox Church.

Meanwhile, police were arresting handfuls of people on Moscow’s Nikitsky Boulevard and near Red Square, where several hundred gathered wearing white ribbons. The groups had hoped to organise flash mobs along Mr Putin’s route to the Kremlin. Several people were seized by police at Jean Jacques, a French restaurant popular with activists.

Military sources said that scores of arrested demonstrators under the call-up age of 27 were being issued drafting papers to the army.

Mr Udaltsov was fined 1, 000 roubles (£20) and released for his part in a sit-down protest during Sunday’s rally, and Mr Navalny was also delivered to court. The Sunday rally ended with riot officers with batons striking and arresting protesters while some in the crowd lobbed stones and fought back.

In his first meeting as president, Mr Putin only hinted at the unrest when he told International Olympic Committee President Jacques Rogge he was "giving priority attention" to preparations for the Winter Games in Russia in 2014, "regardless of our internal political events." Dignitaries were expected to attend a lavish inauguration banquet in the evening.