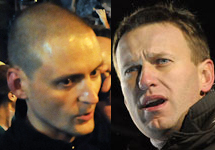 According to lawyer Violetta Volkova, in dealing with Udaltsov’s case, the judge did not read out what the material was, did not study the protocol and police report. She says that the court ruling is 100% unlawful and that they have already lodged an appeal. Udaltsov has gone on a dry food hunger strike in protest. During the night he was taken to hospital with inflammation of an ulcert, but they refused to hospitalize him and he was taken back to the detention unit.

Both men were fined 1 thousand rubles each for supposed infringements of the rules on holding mass gatherings. Both had called for a sit-down strike after the police restriced acess to many-thousnd columns of protesters coming to an authorized rally.

The two have announced ongoing protests Iover the return for a third presidential term which few observers believe was won in an honest and fair election.

The protests began with the March of a Million on Sunday during which more than 400 people were arrested.  There were also protests in other Russian cities.

Although on Sunday there seem to have been some instances where protesters threw things at police officers, the protests since then have been peaceful, yet accompanied by large numbers of detentions. According to the website OVD.info, by 3 a.m. in the morning of 9 May (Victory Day in Russia and a public holidary – translator), 317 people had been detained.

Based on reports at an 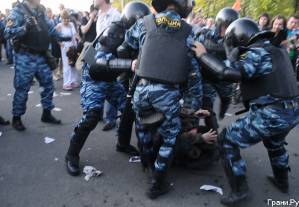