Remand in custody extended for ex-Mayor of Kamianets-PodilskyCivic protest continues in Kamianets-Podilsky over Arrest of the MayorKamianets-Podilsky: Historic City defends democratically elected MayorCVU Danger that leading mayoral candidates will be removed from the listsOPORA: Secrecy over arrest of Lviv TEC head unacceptableUkrainians remain unconvinced of power via the ballot boxFour Members of the CEC call on Yanukovych to bring electoral process on democratic courseMost top positions on electoral commissions go to Party of the RegionsCivic Monitors begin working in MykolaivCommittee of Voters criticizes election campaign lack of transparencyCommittee of Voters reports serious problems before the electionsHead of Central Election Commission also sceptical about new law on electionsParadoxes of the New Law on the Local ElectionsElectoral Law Amendments for appearance onlyAmendments made to the law on the coming electionsCVU: New Law on Local Elections – a Crime against the VoterChange to political map not expected from the local electionsUS groups to censure YanukovichUkraine’s new election law is a step backwards for democracyWarnings over “the worst ever” law on the local elections
• Topics / Elections
• Topics / Politics and human rights 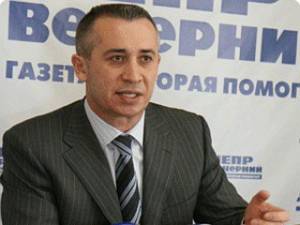 In Dnipropetrovsk well-known politician, leader of the civic organization Hromadska Syla [Civic Force] and businessman, Zahid Krasnov has been arrested. He was taken into custody on 11 May after a criminal investigation was initiated over a road accident which happened four years ago.  The investigation over the accident on 17 January 2008 was terminated in 2009, apparently without any objections from either party and with the consent of the Prosecutor General’s Office.

The head of the Hromadska Syla Press Service, Oksana Karatayevska considers Krasnov’s arrest to be evidence of continuing persecution of leaders of opposition political parties.  She says that they can provide a document in which the second party to the accident and the person injured in it, Dmytro Terykhov states that he has no grievances.

The Dnipropetrovsk Regional Police Press Service denies any political motive. They report that the investigation has been reinstated at the decision of the Prosecutor General’s Office over an accident in which the driver of the other car received serious injuries.

Krasnov has on a number of occasions stated that he plans to stand for election in the parliamentary elections. Ukrainski Novyny writes that according to some reports, he might get the support of the rightwing VO Svoboda Party.