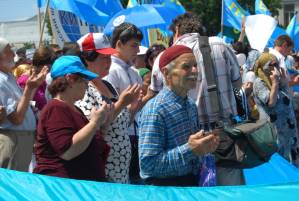 Remembrance ceremonies took place in the Crimea on 18 May marking the 68th anniversary of the Deportation of Crimean Tatars from their ancestral homeland in 1944.  For the first time in many years, the top people in government totally ignored the anniversary.  Given a number of details from Anatoly Mohylyov’s recent past, he might well have wanted to stay away however as Head of the Crimean Parliament, his presence was expected.  He is supposed to have been ill.. The Parliamentary Speaker was also absent, with his deputy there instead.  The Permanent Representative of the President in the Crimea and Deputy Speaker of the Verkhovna Rada (from the opposition Batkivshchyna Party), Mykola Tomenko did attend.

During the meeting, speakers called on the international community to declare the leader of Ukraine’s communists Petro Symonenko persona non grata.  The latter excelled himself on 16 May by stating in the Verkhovna Rada that on one day the entire Crimean Tatar people had switched allegiance to Hitler.  In spreading such lies, Symonenko is going against his own party which in the 1960s acknowledged as false the pretext used by Stalin to justify a terrible crime perpetrated against the Crimean Tatar people.

Based on  information at «Крым.Комментарии».(the photos also) 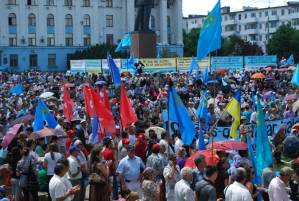