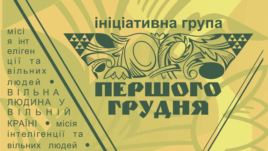 The “First of December” Initiative Group has declared that the draft Law on the Principles of Language Policy is aimed at undermining Ukraine’s Constitution and has called for it to be rejected.

The Group’s statement stresses that “the introduction in Ukraine of the status of languages and procedure for their use not foreseen in Article 10 of the Constitution must be considered an encroachment on the foundations of Ukraine’s constitutional system.”

The Group’s Chairperson Bohdan Havrylyshyn says that the Group is planning to meet with the Speaker of the Verkhovna Rada, Volodymyr Lytvyn and explain the dangers inherent in the draft law.

He says that the draft law, if passed, will lead to a split in society since its real aim is to sideline the Ukrainian language.  The Group is quite simply calling for the bill to be withdrawn as being in breach of Ukraine’s Constitution which stipulates that there is one State language, that being Ukrainian.

The draft bill is on the agenda for Thursday, 24 May.

The “First of December” Initiative Group is made up of a number of well-known figures in Ukraine, some of whom are former dissidents and political prisoners. They see their aim as being the establishment of rules of play that are based on universal values and needed in Ukrainian society.