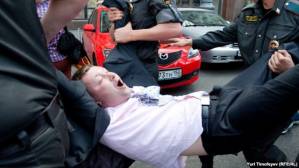 Some Orthodox activists threw punches at the protesters, grabbed their rainbow flags - the symbol of the gay rights movement - and trampled on them in front of television cameras.

Skirmishes took place at both protests, outside the city hall and parliament. Neither rally was sanctioned by Moscow authorities.

Almost all of the approximately 30 gay rights protesters were detained, and many fewer of the roughly 50 Orthodox activists involved.

Nikolai Alexeyev, the leader of the gay rights protests, said he was detained for talking to journalists.

"I am arrested at Moscow Pride City Hall protest, " he wrote in police custody on Twitter. "I have no words."

Police told state-run news agency Itar-Tass that about 40 people had been detained at the protests.

"All of our rights are being trampled on here in Russia, " said demonstrator Igor Yasin. "Your rights aren’t safe and you’re not physically safe."

Earlier this year Russian lawmakers submitted a bill to parliament that would impose fines for spreading gay "propaganda" among minors.

While the law ostensibly targets actions such as the distribution of gay pornography to children, critics say it could be used to ban gay rights demonstrations.

Such a law is in force in President Vladimir Putin’s home city St Petersburg where U.S. pop singer Madonna has said she will use her Russia tour this summer to speak out against the law she called a "ridiculous atrocity".

Homosexuality, punished with jail terms in the Soviet Union, was decriminalized in Russia in 1993, but anti-gay prejudice runs deep and the gay community remains largely underground.

The Russian Orthodox Church, whose influence has grown since the collapse of the Soviet Union in 1991, speaks out against homosexuality. Gay rights rallies have often ended in clashes with militant anti-gay activists and arrests.

Protesters are obliged to clear protests in Moscow with the mayor’s office about a week before.