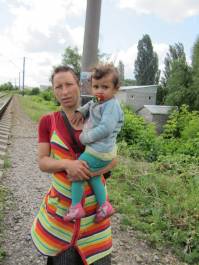 On the eve of Euro 2012 the authorities would appear o have set light to a gypsy camp in Kyiv, leaving up to 60 people totally homeless.

A few years back 50-60 Roma from the Transcarpathian region were driven by poverty to Kyiv where they set up a gypsy camp (as they themselves call it) in Bereznyaki. The camp was on the edge of an industrial and construction rubbish dump and it was from metals and other things found there that the people in the camp lived.   They say that they could earn around 50 UAH a day from metal waste. Of this, admittedly, the police would take around 20 from each shanty dwelling to let them stay there.

Vyacheslav Likhachev, well-known specialist on anti-Semitism and xenophobia in Ukraine, lives in the area and says that he has never heard complaints from local residents about the people in the camp.

Nobody had any problem, he suggests, until the city authorities began preparing for Euro 2012.

The camp dwellers were first evicted and their camp dismantled in April.  The police brought a van, piled them in and took them in the direction of Boryspil and simply left there.  They weren’t allowed to take their things, and the police took their generator away, and wheelbarrow.  It was still cold at that time of the year and these were families they left in the middle of a field.

They had nowhere else to go, and returned.

Back at the camp they started getting visitations from people officially or otherwise “in authority” who told them to get lost, or else. The residents of the gypsy camp had no illusions: Euro 2012 was on the way, and just as once the Soviet authorities got rid of “undesirable” elements from Moscow before the 1980 Olympics, now the local authorities didn’t want football fans seeing the camp from train windows.

10-15 men in plain clothes turned up at the camp the day before yesterday.  A few were recognized as police officers. They began driving them out of the huts and shooting.  With two bullets they killed a dog, and 6 others were shot into the air.   There was panic in the camp. People weren’t given time to grab anything before the huts were set alight.  Those who had any documents saw them go up in smoke.

The BBC and various UK publications have reported the “outraged “denials from Ukrainian officialdom that the country has a problem with racism.  The denials were prompted by the warning given by former English captain Sol Campbell about danger of racist attacks on black football fans.

Only so should such barbaric treatment of residents of a gypsy camp in one of the cities hosting Euro 2012.

So should the extraordinary decision by the village council near where President Yanukovych’s lavish residence Mezhyhirya is located.  On 20 April 2012, seemingly for the second year in a row, the Village Council in Novi Petrivtsii issued a thoroughly racist ban which the Berkut riot police were deployed to enforce.   On Hitler’s birthday the Council’s website reported its decision to ban “people of Roma nationality (gypsies) from the cemetery during the memorial days falling on 22, 23 and 24 April 2012”.

Following a number of articles in the media (and here) the story changed, along with the information on the Council’s site.  The denial since the original message was downloaded that day and can be made available.

It was particularly worrying then that the Berkut riot police should be enlisted to carry out an order so flagrantly in breach of the Constitution and international conventions to which Ukraine is a signatory.

The deployment of police to burn down a gypsy camp and shoot a camp dog is no less disturbing.

Information about the camp and photos from http://corneliu.livejournal.com/172156.html 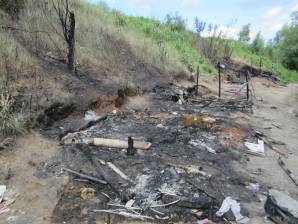