It’s criminals who should be in prison, not their victims! 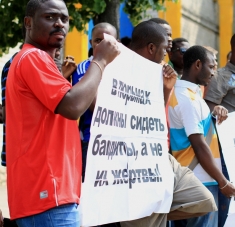 This was the message from the 50 members of the Nigerian community and Ukrainian civic activists who gathered outside the Luhansk SIZO [pre-trial detention centre] on 2 June to pass on birthday wishes to Olaola Sunkami Femi. Since the young student from Nigeria has been held in detention for 7 months now, the main wish was clearly for his release.

Olaola Sunkami Femi is charged with trying to kill some inebriated young people who attacked him in the entrance to his apartment block on 5 November 2011. Both he and the other person involved in the attack say that they were set upon by the group who shouted racist insults and pulled them to the ground, beating them.  Olaola managed to get up and began defending himself with a broken bottle.  In defending himself he lashed out with the bottle, hitting his assailants a few times.

The indictment however presents the situation as a coldblooded and vicious assault by the (one) student on (four) defenceless local residents. It claims that he set upon them, planning to kill them and therefore arming himself in advance with a broken bottle.

They are supposed to have put up no defence as he proceeded to lash out and injure four of them.

Human rights activists say that the trial was accompanied by serious procedural infringements.  Despite Olaola not knowing either Russian or Ukrainian, the investigative activities were carried out in the absence of qualified interpreters, while there were attempts to hold some of them without a lawyer. For over 6 months he was not able to read the file material.

The investigators do not appear to have worried about details that at very least raise questions, such as the likelihood of somebody attempting to murder 4 young people, using only a broken bottle.

The number of “victims” was inexplicably reduced from 6 to 4

The investigators did not find the taxi driver who brought the two Nigerians to their apartment block and who witnessed the attack.

The Postup Human Rights Centre is convinced that the indictment against Olaola Sunkami Femi is a mockery of the principles on which a criminal investigation should be based. It stresses the need for close scrutiny both within Ukraine and abroad and response to any attempts to use methods not based on law to influence the trial’s outcome. 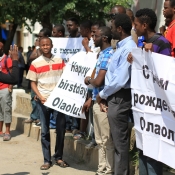